How Portland Became ADU-Friendly (And How Your City Can, Too) 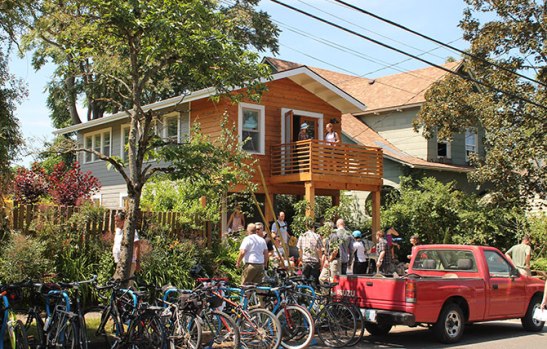 As noted in Why Does Portland Have ALL the ADUs?, Portland is probably America’s most ADU-friendly city. Portland has eliminated many of the Barriers to ADU Development in two big ways: by relaxing regulation and by offering generous financial incentives.

When I talked with more than 60 ADU homeowners and 20 designers and builders for the ADU Case Studies Project I discovered that many of them are building legal, permitted ADUs in Portland for many reasons, including the simple fact that they can. ADUs are a part of the urban fabric here and ADU owners see benefits for themselves, their renters, their neighborhoods, and their cities. Read on to learn about how Portland became such a great place to build ADUs and how your city can become ADU-friendly, too. (You can also check out Tangible Ways You Can Support Space-Efficient Housing.)

First, Portland has created a financial incentive for the creation of ADUs:

Whenever a developer builds a new house they pay System Development Charges (SDCs) which are the fees a developer pays to “buy in” to the existing infrastructure: water, parks, transportation, etc. In 2010 Portland passed the System Development Charge Waiver, which enabled homeowners to build an ADU on their property without paying the SDCs. Building within the fabric of our existing neighborhoods is more cost-effective than sprawling our infrastructure into the suburbs.

However, since SDCs are not scaled to the size of the project, a homeowner would pay the same amount to connect their 300 square foot converted garage into an ADU as they would to build a 3000 square foot brand new house that could accommodate a family of six. SDCs can cost upwards of $10,000, so the waiver of these fees has been a huge financial incentive and resulted in a massive uptick in the number of permitted ADUs created over the past five years.

Many ADU owners in the ADU Case Studies Project state that the SDC Waiver was one of their key reasons for building their ADU. This waiver is set to expire, but there is a push to extend the waiver for an additional 5 years. (You can read the two-page letter that explains why Portland should extend the SDC waiver for 5-years to learn more.)

Here is an example of Model Code for Accessory Dwellings written by Eli Spevak which you can use as you advocate for your city to become ADU-friendly. Best of luck!

7 comments on “How Portland Became ADU-Friendly (And How Your City Can, Too)”