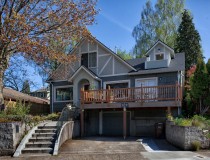 The Project: To create this ADU, we removed the entire second story of the existing house and built a new gable roof with 2 dormers to create a 2 bedroom, 1 bath ADU with a large deck and French doors. The client wanted to supplement their income as they often travel, and the ADU would be a source of income to help with the mortgage when they are not in town.

The Challenges: The house was located on a small one-way street on a slope, and the neighboring houses were very close w/ large mature trees all around. It took a large crane and some dexterous footwork to get all the materials in position. The existing house had old, not to code plumbing and electrical, along with some missing structure that had to be upgraded. The clients also elected to live in the house during all of the construction (while the entire roof was gone!)

The Project: This ADU is certified as both a Passive House and an Earth Advantage Certified Net Zero Energy Home. It is one story with 2 bedrooms, one bath, and vaulted ceilings in main area. The ADU is attached to the rear of a 3 bedroom, 2 bath main residence. It has a fully landscaped private back patio accessed from large French doors. It’s a modern design with universal design features, including no curb on the shower, grab bars, low thresholds, etc. The client’s goals are to promote local investing on healthy, environmentally conscious development for greater density and community connection. The clients website for more info is at: http://www.rootedinvesting.com

The Challenges: The lot was zoned R2.5A which allowed for multiple residences which coincided with the clients density goals. The lot, however, was too small to accommodate this goal. We had to take advantage of a living roof and a permeable concrete driveway to offset the pervious area requirements in order to fit a two unit building on the site. The original design had called for a retrofit/addition to the existing 1997 single story home. Once deconstruction was completed it was discovered that the entire bottom of the sheathing was covered in black mold and the foundation lacked any reinforcement. We had to demolish the entire structure and redesign a new home with an attached ADU on the site. The city of Portland also made the permitting process difficult and added unnecessary costs to the project by requiring gypsum fire blocking to all the walls of the building and a vapor impermeable insulation to a critical area of the living roof, making it more prone to failure and adding significant costs.

Description of the Solutions:

The Project: This 1 bedroom, 1 bath ADU was created by converting a 2-story garage. The bedroom and bath are on the main level with the kitchen and living areas on the second story. The existing garage had some rot and odd framing, but the slab was in good condition and was a good candidate for conversion. The client is intending to use it for a short-term rental for a few years, and plans to eventually live in the ADU and rent out her main house.

The Challenges: The ADU is in the Irvington historic area, and due to this we had to match the exact siding and exterior details of the main house. This included custom knee braces, and custom milled wood tongue and groove siding. This added a premium to the siding costs. There was also a party line sewer that had to be disconnected and a new sewer line run to the ADU. We discovered after cutting into the slab that it was 8-10” thick! Typically it would be 4.” It was a tight budget, but through some good work with the client and architect we were able to keep it within the budget goals for the client.