Do ADUs cause neighborhood parking problems?

[This is part 7 of a 13-part series on accessory dwelling unit research and policy.  Read the series intro and table of contents.]

When planners and city councilors float the idea of loosening rules about ADUs, one fear comes up more than any other: ADUs will harm parking conditions, opponents say.  For example:

The Austin example is particularly interesting, because the news piece makes it sound like the neighborhood advocates are pretty open to the idea of ADUs, having seen some of the possible benefits.  But parking is the sticking point.

Cars are clearly a special, emotional subject.  They are, for better or worse, central to the typical American lifestyle.  Is use of cars really threatened by ADUs?  What is the evidence?

Like practically everything having to do with ADUs, up until recently there basically was no evidence.  ADUs were simply too rare for any effect to have been studied. For example, in Portland, Oregon, widely considered to be the leader in ADU development in the US, the number of ADUs was only about 800 in 2013, in comparison to about 148,000 single-family-residence (SFR) properties where ADUs could be allowed.

That rarity, in itself, provides most of the answer.  Any effect of ADUs on the total number of cars in an urban area, even one like Portland where ADUs are being developed at a “rapid” pace, is going to be quite small.  Here I’ve used Census statistics and results from the Oregon DEQ’s survey of ADU owners to estimate how many cars ADUs contributed to Portland in 2013, compared to SFR’s: 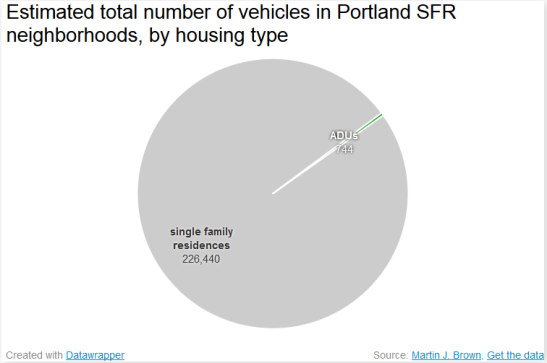 That sliver is even smaller than it might be, because ADUs don’t tend to come with as many cars as other types of housing.  Here I’ve estimated the average number of cars per household in various kinds of housing, using statistics from the American Housing Survey and the DEQ survey mentioned above, as well as a study of “transit oriented developments” (TODs) in Portland.

As you can see, the average American household has 1.88 vehicles associated with it.  Portland is a little bit less car-oriented, with an overall average of 1.53.  If you limit the examination to newly constructed Portland rentals (the best comparable for ADUs), the number is 1.31.   ADUs themselves are less than half the American average at 0.93.  The only form on the graph that beats ADUs is Portland “TODs” — large apartment blocks built on transit lines, with limited offstreet parking.

Curiously, TODs have caused an uproar among (usually-liberal) Portland residents near SE Division street, where TODs are concentrated.   People say they have trouble parking.  Meanwhile Portland’s 800 (probably 1000 by now) ADUs have caused no organized protest.  It’s probably because ADUs are dispersed, so much that it can be hard to notice them.

I find this to be a fascinating contrast, because it shows that how development happens has a big impact on how people feel.  Good development might be a reasonable alternative to zero development — which is a standard some people stick to when they feel their neighborhood is threatened.

“The last thing we need is more building and more density,”

wrote Columbia, Missouri, resident Raeona Nichols when ADUs were being debated in that town.

Zero development, as Ms. Nichols advocates, probably would prevent parking conditions from changing substantially.  But is it realistic?

I think not.  It seems impossible to hold anything as organic as a neighborhood in static state.  Even without ADUs, neighborhoods will change as  demographics, the economy, and other factors change.  In a desirable town, population will increase, and some kind of increase in density will happen whether laws allow it or not.  An increase in population inevitably means an increase in vehicles.

The question isn’t so much “to densify or not?” but “how to densify?”

Back in Raleigh, where efforts to allow ADUs failed, the News & Observer writes:

“Councilman Bonner Gaylord cast the lone vote against scrapping the [ADU] plan. He’s argued that they’d create a useful tool for growth.  ‘This is the time to take the bold step forward,’ [Gaylord] said. ‘We know that we’re running out of land … and how to densify is going to be a problem for the next 20 years.'”

Whether ADUs are a good or bad policy for community development, there is absolutely no evidence they cause parking problems.  Because ADUs are extremely rare (Portland, the nation’s ADU “leader,” has them on less than 1% of eligible lots), and because ADU households have fewer cars than other households, ADUs should have virtually no effect on parking conditions on a citywide basis.

Now if there were dense concentrations of ADUs — for example, a city block where every single house had an ADU — there might be a noticeable effect on parking conditions.  But that day is a long, long, long way off.   Meanwhile, it is possible that ADUs could provide other civic benefits.  Is it worth going without those benefits to “rein in” that tiny sliver of parking spaces?

next week: Do ADUs serve the elderly?

7 comments on “Do ADUs cause neighborhood parking problems?”