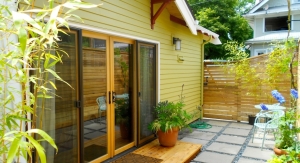 “I’d love to be able to build something again as it was a very rewarding experience. I’d probably take on the General Contractor job next time myself.” – Susan Moray 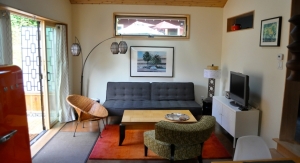 Susan Moray first learned about ADUs from a realtor friend who had taken Kol Peterson’s ADU Class for Homeowners. The next time Kol’s class was offered, Susan attended and she soon decided to convert the garage of her Ladd’s Addition home into an accessory dwelling unit. There were several factors influencing Susan Moray’s decision: flexibility as her housing needs changed, income potential, and the option of having family close by. Additionally, Susan was motivated to build sooner rather than later because she knew that Portland’s waiver of System Development Charges (SDCs) for ADUs was set to expire. (Fortunately, the SDC waiver has been extended though July 2016.) Susan funded her garage conversion with cash and a home equity line of credit (HELOC).

Susan hired Jack Barnes of Jack Barnes Architect to help her create a plan to convert her garage into a flexible space that could be rented out. Susan lives in Ladd’s Addition, one of Portland’s historic neighborhoods and she quickly discovered that her garage was considered a contributing structure.

“What we discovered is that in Ladd’s Addition, a lot of people made changes to their houses and their garages. In order to protect the historic character of the neighborhood, the city went around and tagged original garages and made them contributing structures. I thought originally we’d tear the garage down and replace it.” -Susan Moray 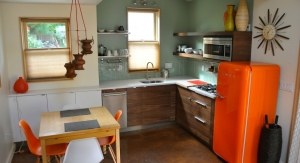 She would be able to convert the garage to an ADU only if she retained the existing height of the building and two of the existing walls. All ADUs in Portland must match the look of the primary dwelling, but because Susan was renovating a contributing structure in a historic district, she was required to follow additional design guidelines in her garage to ADU conversion.

“I would have liked a two story with a smaller footprint but was limited because of the size of my existing home. If zoning didn’t require the ADU to match the house it would have been two story and modern or mid century exterior for sure.” – Susan Moray

As she worked with Jack, Susan’s primary design consideration became maximizing the size of the ADU while adhering to Historic Neighborhood requirements. Prior to applying for her permits, Susan paid for a design consultation meeting with the city of Portland and Jack brought preliminary sketches to explore various possibilities.

“My architect, Jack, did his homework on what could be built, given these limitations and nailed down a design that was accepted on the first try with no changes. That was impressive. We were told by everyone we would never get what he wanted past city permit without going through design review but he did.” -Susan Moray 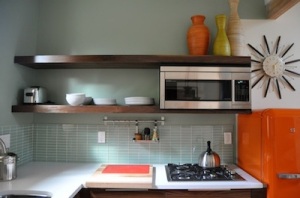 Susan also appreciated Jack’s proficiency with energy efficiency. The cottage received a Platinum Award from Earth Advantage for resource and water efficiency, indoor air quality, environmental responsibility, and utilizing innovative building practices to reduce dependency on non-renewable energy. Her ADU features a wall system that includes insulation in the walls and rigid foam insulation on the exterior of the building. She also has a tankless water heater, low-flow fixtures, radiant heating in the floors, and triple paned windows. She was conscientious about indoor air quality as well, so she used only zero VOC paint. Susan’s favorite features are the high ceilings and skylights.

“It feels much roomier than 550 square feet because of the ceiling heights.” – Susan Moray

Susan’s biggest challenge was starting her garage to ADU conversion in winter, which meant dealing with inclement weather. She hired Stephen Smith of Design Build Portland, a busy builder who was working on other ADUs projects alongside hers. During the planning phase, Stephen had asked Susan if she wanted to do some of the finish work herself to save money and she agreed. Like so many other remodeling projects, Susan’s ADU took longer than expected. Once Stephen wrapped up construction Susan was able to begin the finish work. She stained the concrete floors and the wood trim and painted the exterior.

“Besides having it finished, the highlight of my ADU build was doing the finish work myself and then re-imagining the landscaping.” -Susan Moray 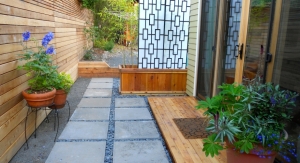 Dedicating part of her yard to construction of the ADU meant that Susan had to give up precious gardening space and take down an Italian plum tree. However, she looked at this as an opportunity to revise her garden plan and develop indoor/outdoor rooms, which provide both houses with opportunities to enjoy the garden.

“I’ve been surprised at how easy it is to live with, given the great design by Jack. There is much more privacy for both structures than I imagined.” -Susan Moray

Susan has a particular fondness for mid-century modern design, but since she could not express this preference on the exterior of the building, she furnished the interior with mid-century-inspired furniture, lighting, appliances, and other design elements.

“I have very much enjoyed the positive feedback about the design elements that stem from my vision of a mid-century interior.” – Susan Moray 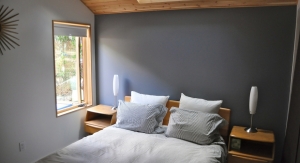 Once it was completed, Susan began using her ADU as a guest house for visiting family and friends. Word of Susan’s ADU has spread, so she is now renting her place as a furnished rental for friends of her family and family of her friends. Susan currently lives in the main house, but she has considered three other arrangements.

“I could possibly live there and rent out the main house or have one of my daughters live in it to care for me as I get older. She could keep an eye on me and I could keep an eye on the grandkids. I also may rent both houses out to give me income to travel. What I like best about my ADU is the versatility of living options and meeting new people who visit.” – Susan Moray

Susan feels the ADU was a good investment. Her calculations show that the ADU will be covering its own construction costs within a few years. So what’s Susan’s advice for homeowners considering building an ADU on their property?

“See many of them. Ask how it was to work with each architect, builder. Be very available to be on site every day to make decisions and notice problems.” -Susan Moray

Finally, Susan emphasized how wonderful it has been to have supportive neighbors as she embarked upon her garage to ADU conversion.

“My neighbors have been nothing but supportive, which has been lovely.” – Susan Moray