Dan Gray’s ADU: A Retreat Above the Garage 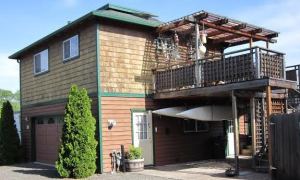 “To me the most critical part of building anything anywhere is keeping the environment in mind. Taking what mother nature gave you. It’s free.” -Dan Gray 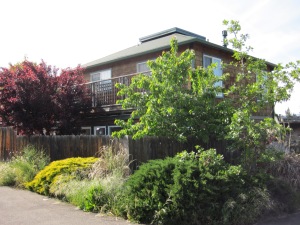 Dan Gray’s ADU from the street

Dan Gray has been a builder in Ashland since the 1980s and he’s known of ADUs for as long as he can remember. However, he always called them mother-in-law apartments, so he didn’t learn the term Accessory Dwelling Unit until he built his first one in Ashland, OR.

For the past several years, Dan had been living in a rural cabin he’d built for himself in the mountains east of Ashland. He’d come into Ashland to work on construction projects, but the big city felt crowded to him. He retreated to his mountain cabin whenever he could. So when Dan moved to Ashland to be close to family, he knew he wanted a little place of his own.

He went down to the city to explore his options under the zoning code. He discovered that his property was zoned to accommodate higher density, but Dan was concerned about the proximity to neighbors.

“The city planning department in Ashland at the time was really trying to push infill. I had the option to build 5 houses, but if I was going to live there I didn’t want it to be crowded.” -Dan Gray

Dan’s son suggested they build a detached garage with an apartment above it. Dan liked the idea because he could make himself a little private place perched high enough to get out of the crowd.

“If I had it to do over again I might have designed it so that it wasn’t 2 stories, only for access. It’s definitely not going to work for grandma, but for what I was doing it was fine.” -Dan Gray

He had previously built an ADU that was bank financed, but this time Dan decided to keep the finances really simple. He sold his property in the mountains to fund his ADU. He didn’t have any labor costs because he, his son, and a family friend did all the work themselves.

“It was pretty seamless. I had no banking issues. I paid for my materials and then I was broke, but I had a roof over my head. Income from the primary dwelling was helping to pay the mortgage.” – Dan Gray

“That’s how this whole thing started. I bought an old farm house, gutted it and remodeled it, and used same siding for compatibility. It was not in the historic area, but I sort of mimicked the building.” -Dan Gray

Dan was familiar with building so he didn’t encounter any major challenges related to the build. The only zoning code challenge Dan encountered was the solar setback.

“I knew the building department and they knew me. The height of the building was limited due to the solar setback laws. It was minimal. You just work your way around it and set your building back another foot.” – Dan Gray

“The highlight was the day I got my certificate of occupancy. Being done and being able to move in and have a roof over my head!” – Dan Gray

Dan Gray’s ADU – a retreat above the garage

For several years Dan lived in his apartment over the garage and rented out the old farmhouse. Dan’s favorite feature of his apartment over the garage was the deck. He enjoyed being up on the second story and being able to look at the mountains. Dan is proud that he implemented good use of the space, though he notes the he tends to feel “crowded by people, not stuff.”

Being a landlord is Dan’s least favorite part of having an ADU, but he’s glad his tenants get along and like living there.

“The renters keep to themselves, but know each other. Everybody’s got their space and respects everyone else’s space. The fella who lives in the apartment now says it’s going to take the SWAT team to get him out of there. He loves it. He has room in the garage for his motorcycle and his kayak is hanging from the ceiling.” -Dan Gray

Dan figures he’ll probably sell his property in next decade. He explains:

“It’s hard being a landlord from a distance. ADUs are a selling point when you go to sell a property. I want to pay attention to that and how special they are with marketability. The property is always for sale. You can contact me if you’re interested.” -Dan Gray

So what advice does Dan have for homeowners considering creating an ADU on their property?

“Do it! It just totally makes sense. Be smart. Pay attention. Utilize all the square footage that you can, with shelving and closets, above and under the stairwell. Use a little common sense with the solar. To me that’s the most important part of anything. You get some warmth and light without having to use any other resources. All that stuff is vital.” -Dan Gray

Dan Gray’s ADU – a retreat above the garage

Dan Gray’s ADU from the street

2 comments on “Dan Gray’s ADU: A Retreat Above the Garage”