Inconspicuous as any other garage, this ADU is an inspiration to me. While it was built as an unpermitted ADU, like 2/3rds to 3/4ths of Portland’s ADUs, it functions like an accessory dwelling unit for all intents and purposes.

Living area on the lower left, closet on the right, sleeping loft above, kitchen to the far right

Upon purchasing the home, the garage looked just like any other typical garage 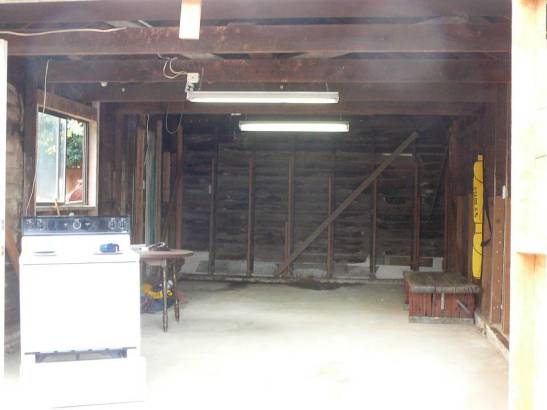 The garage interior was nothing special

Several builders checked out the structure and confirmed Rachel’s inclination that she would be able to make the garage structurally solid without tearing down the garage and starting from scratch, so she proceeded with the conversion. $23,000 and six months later, she had finished the conversion. The plumbing and electrical work was done to code, but was also not permitted. The unpermitted ADU now has a 385 square-foot footprint plus a sleeping loft. 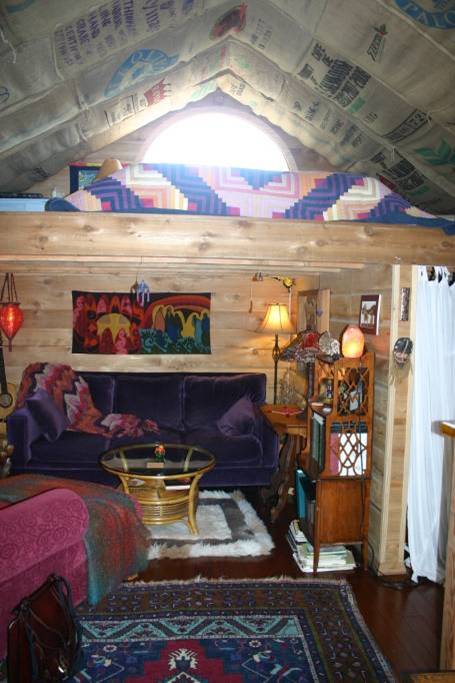 View from the living room area toward the kitchen. The bathroom is on the other side of the fridge and stove.

Initially, Rachel lived in the ADU for two years and rented out the main house, which almost covered the cost of her home mortgage. Recently she moved, and now she rents out the house and ADU separately to two single moms who have young children (that are the best of friends). The two moms and their two children share a backyard complete with a playground, chickens, ducks, and a dog. The two moms are extremely grateful to ‘live with’ one another on the same property, but to ‘live independently’. They babysit for one another, share meals, combine errands, and care-take the property together. This symbiotic living arrangement would be difficult to match without a house and an ADU.

The interior space of this unpermitted ADU is charming and lovely in its own right. It is a wonderful, cozy, and personal space, perfect for a single person or two intimate people. Architecturally, scissored trusses, a bathroom, a loft, and three windows were added. A kitchen and bathroom were built with simple framing, plywood, and tile, and fully plumbed.  The existing garage wall framing was used and the studs were sistered.  The ceiling finish is simple and lovely—free burlap coffee bean bags stapled to framing members. The walls and ceiling are insulated with closed cell spray foam, and a single cadet heater adequately heats the whole structure. It’s quiet although it’s urban. The talavera tile work in the kitchen and bathroom and trusses give the space an artistic flare.

Tiled bathroom shower stall on the right. Sink area to the left.

Tiled countertops over plywood in the kitchen

Rachel would have permitted it if it would have been affordable for her to follow the regulatory path. However, she has no regrets about having built her beautiful little urban “cabin”. Rachel loved living in her cabin for two years. Now, she’s happy to be able to provide a unique living arrangement for two single moms who couldn’t have found such a perfect living arrangement anywhere else. The rental income from the house and ADU cover the property mortgage and provide Rachel with additional income each month.

This entry was posted on December 23, 2013 by Eli Spevak in Conversion, Garage, Projects.