IMPORTANT NOTE!  This is currently a very uncommon form of ADU ownership.  If you just want to learn how to build an ADU on your own property, for example a cottage for your grandmother, and keep the ownership for yourself, you don’t need to get in to this material.  Some great starting points on the site are this video or these pages: What Is An ADU? ; Getting Started ; and our whole gallery of sample projects.

The typical ADU in Portland is a backyard cottage or basement apartment created by a homeowner. Homeowners have found ADUs to be a great way to have a family member close by or to generate some monthly rental income. However, there are a handful of developers who are using ADUs as part of their toolkit to create unique housing options. Kristy Lakin is one of these developers.

Kristy found the inspiration to develop a piece of property with three primary dwellings, each with its own ADU, when she saw the Sabin Green project. Sabin Green is project created by Eli Spevak of Orange Splot LLC, which consists of two houses, each with its own ADU, making a small community of dwellings. Eli recently wrote a post called ADUs and Condos: Separating Ownership, which describes the process and considerations he went through to develop this property so that each of the units could be individually owned.

Kristy explains that her interest in developing small housing options like these comes from an interest in creating additional housing without compromising neighborhood character.

“Portland in my mind is pretty low-density. If we’re going to continue to keep the urban growth boundary and continue to grow, we’ll need to increase density. Portlanders seem reluctant to get rid of their single-family houses, so ADUs are the perfect way to increase density and do it in a relatively low impact and affordable way.” –Kristy Lakin

Once Kristy decided to develop a housing project of a similar scope as Sabin Green, she began scouting for property.

“I had the idea in mind, then found the perfect lot with an old falling-apart house. The property was 166 feet long and 20,000 square feet, so the original proposal was to have four 30 foot wide, 5,000 square foot lots.” –Kristy Lakin

Constructing four primary dwellings, each with its own ADU, would have maxed out the density allowable on the property. It also would have increased the income potential of the property. ADUs are allowed by-right in Portland, Oregon, which means that as long as homeowners comply with all applicable regulations, they can develop an ADU on their property without going into a public review process. However, due to the narrow width of the originally proposed lots (30’), Kristy needed to go through the planned development process, which requires a more extensive review process.

“We switched to three lots in order to avoid the lengthy and involved review as well as maximize open space. We were responding to neighborhood concerns about density. The property had an old lot line that was reestablished so we could begin construction of the first units. We deconstructed the existing house and donated everything we could to the ReBuilding Center.” – Kristy Lakin

Kristy worked with several architect friends to develop the designs for the six dwellings. Jill Cropp of Studio Cropp Architecture is the architect of record. As they worked through the design process, one of the biggest guiding factors was preservation of mature trees on the site. It was important to the design team that they find the right fit for the dwellings on the lots.

“The mature trees were definitely a selling point for me, especially the big walnut right in the middle. The site design preserves the trees while creating almost 6,000 square feet of open space for residents.” – Kristy Lakin

“I would have had them match anyway. I wanted to create a cohesive look and feel since the project will be its own pocket community within the larger community. The style is pretty modern. I know a lot of Portlanders would like all new houses to match the existing neighboring houses. I personally think architecture is a way to experiment and be creative – it’s ever changing and evolving. It’s an expression of how we live now. I like modern houses with large windows, open floors plans and high ceilings. Especially in Portland because it’s so gray most of the year. The houses feel really open and bright, even on the grayest days.” – Kristy Lakin

Sustainability was also a driving factor in the design process. The team designed the units to the Earth Advantage Platinum standard. They would feature ductless mini-split heat pumps, dual flush toilets, advanced framing, and blown-in insulation. They would also be solar-ready.

Kristy began construction of the first set of houses in December of 2012 and completed it in 2013. At this point Kristy has constructed one primary dwelling, which is a 2,000 square foot 3-bedroom, 2 ½ bath home. Its ADU is a 650 square foot 1 bedroom unit with 1 bath. The lot has been divided into three separate lots and Kristy will begin construction on the remaining houses in the next month. Since the cost of the ADU was wrapped in with the construction cost of the main house, she says it’s difficult to parse out the individual costs. She guesses is it was approximately $100,000 for construction; this does not include land costs or associated development costs such as the land division

“I was excited about the concept of the ADU, but I didn’t realize how much I’d love it until it was built. It feels so big and open. Every time I see it I think ‘I could live here!” To design and build something you love and are proud of is really exciting and fun.” –Kristy Lakin

Kristy plans to sell each unit as it is built. She noted that development of this property with three primary dwellings doesn’t pencil well without the ADUs. She also feels that she would be wasting precious space without them.

“The standard development model probably would have been flag lots or single family houses with garages at the back of the property – which would have wasted open space and created lots of impervious surfaces with the long driveways. I wanted to be a little more creative. There was a time in the design process I thought about doing a green court. I’d met with planners at the City. In that scenario I would have done attached ADUs. Either way, I liked the idea of increasing density while still providing privacy. I also liked the idea of doing what Sabin Green did and convert them to condos so I could sell them separately. The condominium conversion process is done through the County and State. The units are considered stand-alone condominiums. From a mortgage standpoint, this means there are not the same restrictions as a traditional shared-wall condo. So, it’s really pretty easy to find mortgage options.” –Kristy Lakin

When Kristy put the first set of houses on the market this spring the existing ADU sold in 2 days for $195,000. 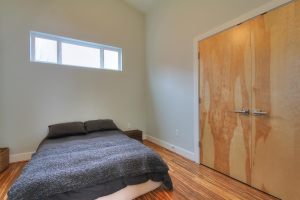 “There aren’t a lot of options for that price. The new owner had been looking at a lot of traditional condos. Here he had his own walls, privacy, open space and it was cheaper than a lot of condos that had shared walls. There’s an informal waiting list for the next ADUs and I haven’t even started marketing them yet. People saw the first one and liked it so much they wanted to be told when the other ones were built.” –Kristy Lakin

“It makes sense that you’d want to know who you’re living near. Rather than doing traditional marketing where you get an offer and don’t meet the buyer until after closing – if you meet them at all – I’m going to be a little more involved. I’m trying to make it a little less MTV Real World a little more ideal world.” –Kristy Lakin

So what advice does Kristy have for developers considering using ADUs in their projects?

“Planning and good design is key. Having a site design that creates a good balance of shared space and private space is important. And, of course, the design of the ADU itself is critical. Small spaces can feel big and open or small and cramped. An open floor plan, high ceilings and lots of windows can all help make a small space feel big.” –Kristy Lakin