Do accessory dwelling units serve older persons? (Or, who lives in, and owns, ADUs?)

[This is part 8 of a 13-part series about ADU research and policy.  Read the series intro and table of contents.]

You can’t really say when ADUs were “invented,” since having a second small dwelling on a piece of property seems to be an idea as old and natural as the idea of housing itself.  Just look at the carriage-house apartments you see in big old houses in Seattle, at farm properties where “new” and “old” structures house different generations or branches of the family, and at family compounds all over Africa and Asia. 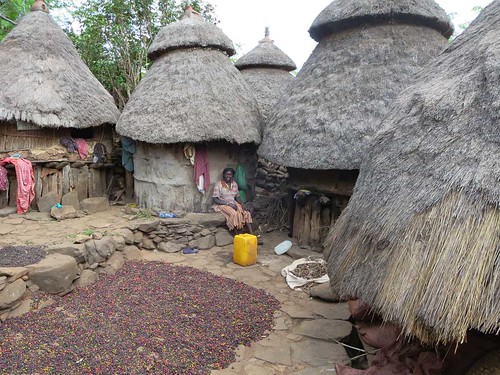 If that’s too exotic or déclassé for you, look at Thomas Jefferson’s Monticello, where, as Lester Walker has documented in his book about tiny houses, a small, clever house was Jefferson’s residence as the big place was being built. This house later became part of one of Monticello’s extended wings. 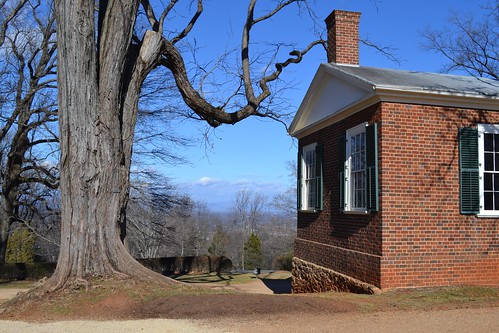 So ADUs are as old as the hills, and as American as apple pie.

However, the current era of ADU advocacy started about three decades ago, when there was a lot of concern for how the “elderly,” perhaps better known as older persons, would be housed.   Programs like “Double Unit Opportunity” reasoned that a retiring person who built an ADU might then have two kinds of resources:

This concept was supported by an opinion poll showing that most aging people wanted to stay in their homes as they aged. AARP supported ADUs with the writing of a model code.

How has that turned out?  Is there evidence that ADUs are providing retirement residences and/or financial security for seniors?

The answer to this one is a little complicated.  To sum up, the statistics currently show that ADUs aren’t special when it comes to supporting or housing seniors.  However, there are strong suggestions this will change in the future.

It all relates to how ADUs are developed and owned.  As you hopefully know, an ADU is, by definition, not a legally separate asset. It is not like a condo or an RV that can be bought or sold on its own.  Rather, the person who owns the property and the “main house” also owns the ADU.  Because most ADUs in Portland have been created recently, at this point in time the homeowner that created the ADU is usually still the owner.  Make sense so far?

Now one of the things early studies of ADUs, such as a “Double Unit Opportunity” (doesn’t that sound like something from a fortune cookie?) discovered was that people of retirement age (65+) were extremely unlikely to build ADUs.   Instead, it was younger people, usually 35-55, that were willing to take on the considerable labor and risk of creating a second dwelling.  This pattern is evident when I compare the age distribution of Portland ADU owners to the age distribution of Portland homeowners in general: 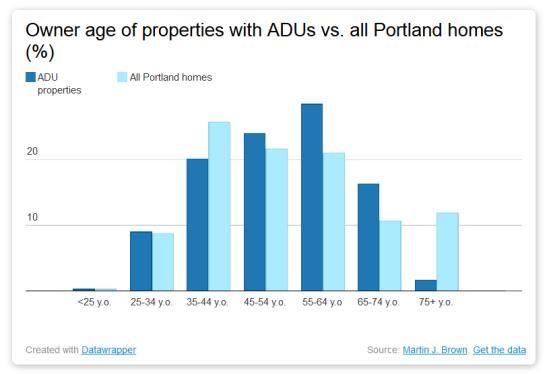 However, ADU owners are slightly more likely than general Portland homeowners to be 55-74 years old.  In other words, ADUs are popular among those who are getting old, but who aren’t in the highest age categories (e.g. 75+) yet.

Now, who is living in the ADUs these people have created?  I made a similar comparison of the ages of ADU tenants to Portland tenants in general.

Again, the age distribution of people living in ADUs is generally similar to those in all Portland rentals.  The biggest  difference is in the 25-34 age group, which is more common in ADUs than in general rentals.

However, this doesn’t take into account people’s intentions.  Examine the personal commentary of practically anyone who has created an ADU, and you’ll see that the homeowner-developers behind ADUs practically always have long-term plans that stretch into retirement. For example, one respondent to the DEQ’s survey of Oregon ADU owners wrote,

“We rent [our ADU] to a young family member and might live in the little house when we retire, renting the main house to supplement our income.”

For two examples of this idea, on different ends of the cost spectrum, look at Jane Doe’s and Bruce Nelson’s projects.

Moreover, families that have multiple generations living in one place with the help of an ADU generally seem to be really happy with it.

“My favorite feature of my SDU is proximity to my grandkids,”

said Dennis Martin in our profile of his project.

These ideas are so common in personal anecdotes about ADUs (see the dozens of examples in our case studies) that I think the current shape of the ownership and tenant age distributions are an accident of timing.  In particular, the shapes of those graphs are the result of two facts: a) it is typically middle-aged people who create ADUs; and b) only in the past 5 or 10 years has creating ADUs been a popular development option in Portland.

ADUs might not be created very often by retired people, but certainly people who own ADUs will be able to use and own them as they retire.  The comments in our case studies suggest that ADUs are a vital part of family plans for the older persons in their lives, and for their future selves.  As a consequence, I think the ADU age-ownership distribution will look quite different ten years from now.

So don’t worry, grandma — if there’s an ADU in the family, when the time comes it will be there for you.

next week: How do ADUs support the community economically?

3 comments on “Do accessory dwelling units serve older persons? (Or, who lives in, and owns, ADUs?)”