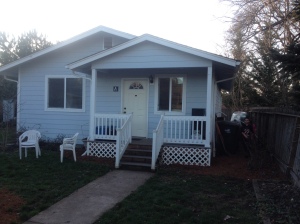 “My favorite feature of my SDU is proximity to my grandkids.” – Dennis Martin

Dennis Martin first learned of ADUs – or SDUs (Secondary Dwelling Units) as they’re called in Eugene, OR – by reading a newspaper article about them. The story intrigued Dennis and got him thinking about building ADUs. Dennis, who is employed as a construction superintendent for a union commercial contracting company, has been remodeling houses and building additions for the past twenty-three years. He was already well-acquainted with the building permitting process. Remodeling work had taught him how to work within the constraints of an existing site. Furthermore, building additions helped Dennis understand the complexities of making a new structure meld with an older one.

There were several driving forces that convinced Dennis and his wife Stephanie to build an SDU on their own property. Their daughter and son-in-law were looking for an affordable place to call home and wanted to live nearby. Meanwhile, remodeling work was slow because of the economic recession. Stephanie and Dennis realized that if they built an ADU on the property they already owned he could create a home for their daughter without having to purchase land. It made good sense financially and it could be a good addition to Dennis’ building portfolio. However, the most important factor for Stephanie and Dennis was that an SDU would also enable them to have family close by. They took out a home equity line of credit (HELOC) and their daughter and son-in-law contributed $10,000 to finance construction of the new dwelling. 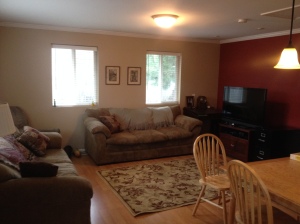 As he designed the SDU, Dennis realized that the height restriction that was in place at the time constrained his options, but he decided to work within the regulations rather than requesting a variance because it would save him time and money. The System Development Charges (SDCs), which ran approximately $6,000, were the biggest challenge Dennis faced while developing an SDU on his property. In Eugene, SDCs are the same cost for an SDU as they are for a standard primary dwelling, so they were a large portion of Dennis’ per-square-foot construction costs. Fortunately, Dennis was able to keep costs low because he did the work himself.

“I worked nights and weekends and built my SDU in about 4 months!” -Dennis Martin

Once the SDU was finished, Dennis rented it to his daughter and son-in-law. This arrangement worked well financially because the rental income helped cover the cost of the construction loan.

Dennis appreciates that having a SDU has given his family flexibility as housing needs change. Stephanie and Dennis recently moved into the SDU and they now rent the main house to their daughter and son-in-law.

“The logistics of moving two families at the same time were challenging, to say the least.” – Dennis Martin

Since they had one empty room in the main house, they moved the furnishings from one of the SDU bedrooms into that room. Once they’d painted the now-empty SDU bedroom, they moved the contents of one of the main house bedrooms into the SDU and “basically repeated until all the rooms were switched over.” Fortunately, the families were only moving only about 40 feet from one building to the other!

“My daughter was moving into the house that she grew up in! She came full circle, which was priceless. Now the grandkids have their own bedrooms after sharing a bedroom and one bathroom in the SDU.” – Dennis Martin

Dennis Martin’s ADU from the backyard

Dennis says he feels there is adequate storage in the SDU because he used roof trusses to create storage space in the attic. However, he says if he had it to do over again, he would have designed an SDU up to the maximum square footage allowed, which is 800 square feet in Eugene, OR. Dennis and his wife Stephanie had lived in the primary dwelling for 26 years, so they had to scale down as they went from about 1,200 square feet to 768 square feet. Dennis says there haven’t been any surprises and there’s nothing he dislikes about having an SDU on his property.

Dennis’ favorite aspect of having an SDU is that it puts him in close proximity to his three grandkids. He and Stephanie are able to provide childcare and share meals with their children and grandchildren. The SDU has helped three generations of the Martin family enjoy the place they call home.

So what’s Dennis’ advice for homeowners considering creating an ADU on their property?

“Go for it!” -Dennis Martin

Dennis Martin’s ADU from the backyard