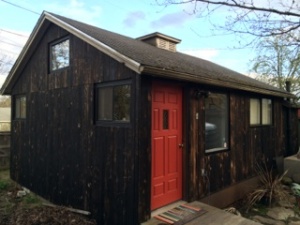 “This is like a one in a million story. It was the first time the city of Eugene converted the existing residence into a SDU [secondary dwelling unit] and the new construction became the primary.” – Caleb Bruce

As a builder, contractor, and cabinet maker, Caleb Bruce builds boxes for a living, but he has also developed a knack for out-of-the-box thinking. Here’s the story of how Caleb turned an existing house into a secondary dwelling (or an accessory dwelling as we call them in Portland, OR). 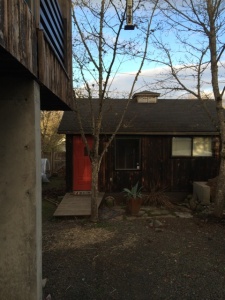 In 2010, Caleb and his wife Tori purchased a long skinny property with an existing 450 square foot house at the back of the lot. The original house, constructed in 1950, was too small for their family, but there was enough room at the front of the lot to build a larger home. The smaller house could be rented out to generate income to subsidize the mortgage on the larger home. So Caleb and Tori embarked on an unusual quest to build their family a new home on the front of the lot and turn the existing house into a secondary dwelling unit (SDU).

Are you scratching your head right now? Eugene’s building officials were, too.

“They knew what could be done, and they knew what needed to be done, but no one had ever done this before, so it took a day and a half before they figured out exactly how we could make it happen.”  – Caleb Bruce 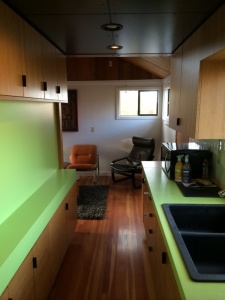 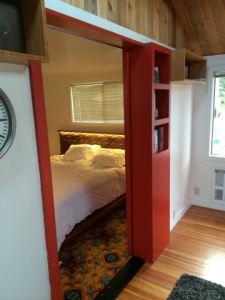 Once he determined that it would be possible to build a larger home at the front of the lot, Caleb decided the first step was to remodel the 450 square foot ADU. He implemented “little things that make it feel like a bigger space.” He moved the water heater into the attic, created a built-in dining nook which takes up less space than a table and chairs, and installed a 24″ range instead of a full-size version. 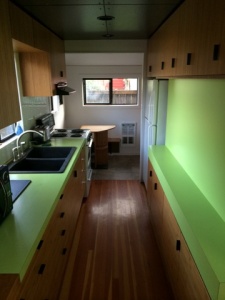 “It’s an incredibly livable 450. It makes you that much more tidy. It forces you to live small.” – Caleb Bruce

Caleb and Tori spent $7,500 out of pocket to remodel the small house into an efficient and highly-functional rental unit. He did the design and remodeling work for the SDU himself.

“When you a self-employed cabinet maker, you use your talents.” – Caleb Bruce 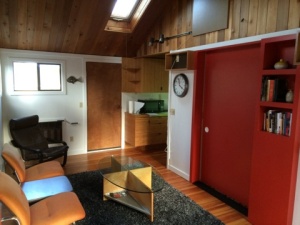 The tenants who moved in paid $600 per month and this rental income would prove critical as Caleb and Tori financed the construction of the main dwelling. Since Caleb is self-employed, his income fluctuates, so rental income from the ADU stabilized Caleb’s income. 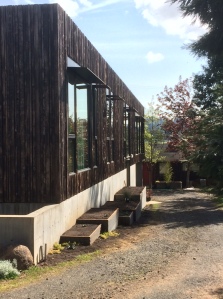 the ADU is tucked behind the new primary dwelling

The new primary dwelling was designed by Eggleston|Farkas and built to Earth Advantage standards. However, it looked nothing like the houses on either side. He was turned down by two banks who wouldn’t finance the $180,000 he was requesting for construction of his home because they declared the house too modern. (Unlike Portland, Eugene does not require a detached accessory dwelling to match the primary dwelling in exterior appearance.) Fortunately, some gracious friends, who knew of Caleb’s struggle to get a loan on such a unique, ambitious construction project, stepped in at just the right time. They had been watching his project closely and they offered a private construction loan to build the new primary dwelling.

“The whole project was a gamble. The rental income from the SDU was only thing that helped me get the mortgage.” – Caleb Bruce

Fortunately, Tori and Caleb’s gamble paid off. When their property was appraised after construction of the new primary dwelling, it was assessed at more than twice the loan amount and their credit union managed to get the mortgage into their portfolio within two weeks. The mortgage payment is around $1,300 and their tenants pay $600 for the ADU, which brings Caleb and Tori’s net housing cost down to just $700 per month! 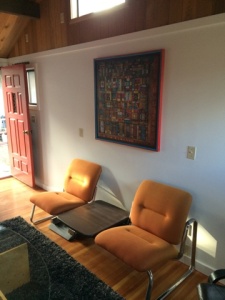 “The SDU has already paid for itself. It got me my bank loan, so the SDU paid for itself the day we bought the property. That was the biggest driving factor that kept the project alive and do-able: knowing I had this income and asset. The SDU became the biggest asset we had.” – Caleb Bruce

The ADU tenants have recently moved away and Caleb and Tori are considering trying their hand at renting it out as a short-term, furnished unit. They figure if it doesn’t work out they can either switch the ADU back to the long-term rental market or use the space as guest accommodations. On the other hand, Caleb has considered the possibility of a family member moving into the ADU or moving in there himself with his wife once their daughter leaves the nest.

After navigating the complex regulations that eventually allowed him to build his dream house with an income-producing SDU in the backyard, Caleb offers this advice for someone else considering building an ADU on their property:

“Do it right. There’s such a housing crunch, but the days of turing your bedroom into an ADU are going to be gone soon. Go through the process to make it legal. It’s going to get more critical in the future.” – Caleb Bruce