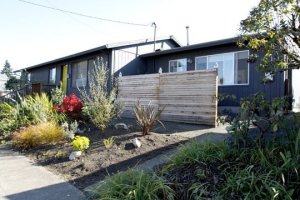 “I was surprised how easy it is to increase density on a single-family lot and still feel like there’s plenty of space. The entire process was one of the most gratifying experiences I’ve had.” – Naomi Cole

Naomi Cole first learned about ADUs through her work in Portland’s sustainability industry. She and her husband Joe, along with a couple family members, started looking for investment opportunities with the intention of finding a property with ADU potential. In 2012, they found a 1980s ranch home, with an attached garage, in the Overlook neighborhood. The rented out their previous home to live in the new house, while converting the garage to ADU. (They then planned to live in the ADU to save money while paying back loan costs.) Portland’s waiver of System Development Charges (SDCs) made the entire plan a no brainer. (Fortunately, the SDC waiver has been extended though July 2016.)

Joe and Naomi planned to design and build the ADU themselves, but ultimately sought some help from an architect friend, and Naomi’s former colleague, Asmund Tweto. Naomi and Asmund focused on the design work and then Joe and Asmund did the building. Their major design consideration was efficient use of a small space within the footprint of an existing garage, so they opted for an open floor plan with one bedroom. They were inspired by the ability to live simply and spent hours perusing creative design ideas on Apartment Therapy. (Their ADU was profiled on Apartment Therapy in October 2013 as Naomi’s Single Family Home to a Duplex: Turning a Garage into an Apartment.)

“I’m proud of fact that we designed it, built it, and then lived in it. That really makes a space feel like home.” – Naomi Cole

Considering Naomi’s background in sustainability and green building, it’s no surprise that energy-efficiency was just as important to her as efficiency of space (though Joe was equally, if not more, determined to build with a nearly net zero impact). The couple incorporated several sustainability measures as they converted their garage into a living space. They started out by repurposing the existing structure. They then added radiant heat in the floors (because they had to pour a new concrete slab anyway) and 11” thick super-insulated walls. The thick walls are their favorite feature because they help the space to maintain a fairly steady temperature.

“If I had it to do over again I would use small electric wall heaters instead of radiant fooring. With such great insulation in a small space, the radiant floor is really overkill.” – Naomi Cole

The garage has 9-foot ceilings and, with plenty of well-designed vertical storage, they were pleased to discover storage space was quite adequate. The tall ceilings and generous windows make the small space feel light and open, and when people walk in, they are surprised to learn it is only 375 square feet. The only drawback, for them living in the space, is that they love to host. They found that the ADU could comfortably fit 7 people – but only if guests arrived and immediately sat down to dinner!

Amazingly, the project was completed on budget and within their target timeframe. The biggest challenge turned out to be a matter of imagination rather than regulation. Naomi explains, “Our biggest challenge was convincing our friends and family that we could live comfortably in a space that size!” They enjoyed the process and the outcome so much that they decided to live on the property that they expected to be a rental, long term. 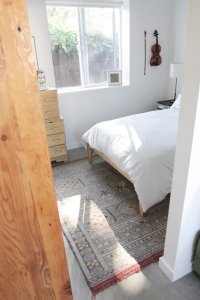 Joe and Naomi lived in their ADU for a year and rented out the primary dwelling. (The savings in living expenses allowed them to spend six months in Italy in 2013 – all part of their grand investment plan.) When the tenants in the main house moved out, Naomi and Joe ultimately decided to move into the bigger unit (which allowed Joe to have a home office instead of renting a space downtown). The ADU is now a long-term rental.

Their one regret is not adding more insulation and sound proofing in the shared wall between the two units because there is a bit of noise transmission. However, they have decided this an acceptable trade-off considering the community, the increased density, and the flexibility for how they can use the property in the long term.

“With the current rental market, we are getting more than expected in rent. We expect to pay back to ADU loan costs in about four years with the rental income.” – Naomi Cole

Joe and Naomi have no plans to sell the property and they have considered other possibilities for their ADU for the future as well. They might rent their ADU on Airbnb or use it as an office. They also have ambitions to invest in more residential properties and would only consider those with ADU potential.

So what advice does Naomi have for someone considering creating an ADU on their own property?