Imagine, in the abstract, the absentee landlord.

I personally see him as a sort of Dickensian villain, say Sir Mulberry Hawk, coarse in intention despite his fine clothing and mustache, charging through life with an obscene amount in his bank account and bloody dribbles of wine in his beard. He cares nothing for the communities his properties occupy, and everything for the rents he receives.

That’s a cartoon from my imagination, but a similar specter pops up again and again in the real civic debate about accessory dwelling units (ADUs, which you might know as granny flats, in-law units, multigenerational housing, or some other name).

“The proposed ordinance for DADUs and ADUs should require permanent owner occupancy,” wrote Seattle’s Laurelhurst Community Club (LCC) in 2009. “Without owner-occupancy, the family home with an accessory apartment becomes a commercial investment. In contrast with absentee landlords, homeowners in residence can be expected to have an immediate, active interest in who rents these extra units, and are more likely to work to ensure that the impacts which result from this increase in the density of development will be manageable.”

This is a fascinating bit of language, because it is exceedingly polite, but on close inspection it can’t hide a kind of us-vs.-them sentiment. The clear assumption of the statement is that people who own and occupy the same home are most likely to make a positive contribution to the community. The complementary assumption is that landlords (especially absentee ones) and renters will be less interested in making a positive contribution, and could be the kind of people to “bring down” the tone of the neighborhood, not to mention consume all the parking spaces. (Parking worries take up a big part of the LCC’s letter.)

These aren’t uncommon sentiments, even when the word “absentee” doesn’t come up:

“ADU’s would completely change the nature of our neighborhoods,” writes California blogger Westchester Dad, “by allowing your neighbors to rent out that freshly built unit behind their house to overlook your backyard and they would not have to provide parking so the “tenant” would end up parking on the street. Now imagine watching the value of your home plummet.”

Like most of the argument about ADUs, pro and con, this kind of worry can get repetitive, because frankly there is not much evidence to actually discuss. There are simply too few legal ADUs out there for the issues of neighborhood impact to have been studied formally. The fear of landlords and renters is a prospective fear, not a concern about something that has already happened somewhere.

Despite the absence of evidence, this anxiety has had a very real influence. Many cities that allow ADUs, such as Seattle, require owner occupancy in at least one unit of a house-ADU combination. The AARP’s model ADU code strongly encourages owner-occupancy requirements.

Portland, Oregon takes a different tack. Portland is completely permissive in a way that might horrify ADU opponents in Alexandria, or even ADU proponents at AARP: it allows ADUs on nearly any standard single family lot.  No extra offstreet parking is required. And, there are  no requirements for owner occupancy. A homeowner can build an ADU and rent out either or both of the dwelling units on their property. If he/she wants to leave town, it’s totally legal.

So, in this land of (relative) ADU anarchy, how many properties with ADUs are occupied by the owner? Fortunately some information is now available. As part of the legwork for an  survey of ADU owners, Jordan Palmeri of the Oregon DEQ recently compiled a list of all properties with legal ADUs in Portland, including the addresses of their owners. This census provided a quick way to measure owner occupancy: if the owner’s address was the same as the property address, the property could be considered owner-occupied. It might miss a few oddball situations here or there (people with multiple residences, PO Boxes, etc) but all in all it should be a pretty good approximation.

And the answer, in the highly permissive city of Portland, Oregon, is: 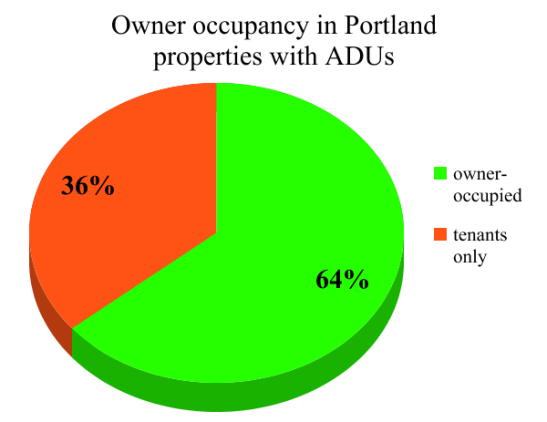 64% of the 701 surveyable Portland properties with ADUs had an owner living in at least one of the units. (Caveat: this number might be refined up or down a little as Jordan’s work progresses, because some of these units are still under construction and unsold.)

This is an interesting number because it’s not a slam dunk either way. 64% means that naturally, without any legal requirement, a large proportion of properties with ADUs do in fact conform to the ideal of the community-oriented “owner-occupier” that the LCC requested for Seattle. ADU skeptics can probably take some comfort in that.

Meanwhile, the other 36% represents commercial activity – real estate investors of one kind or another that have properties with ADUs and often hold on to them for rental income. In many cases they are the developers of the ADUs, and so have created new housing in a city where the rental market is very tight. ADU advocates can look to that as a sign that this is a flexible and responsive form of development… it seems quicker for 50 owners to permit and build one ADU each than for one developer to permit and build a 50-unit apartment block.

The fact that commercial investors have taken an interest in ADUs, and are putting out their own money to develop them, is curious in light of the difficulty typical homeowners face when trying to finance construction of a new ADU on their own. The commercial investors have run the numbers, just like some homeowners, and decided that available rents could more than make the cost of construction worthwhile.  One rather conservative estimate, in the paper I wrote about ADU appraisals with Taylor Watkins, suggests that properties with ADUs are worth on average about 10% more when considered from an income point of view than sales prices would indicate.

Currently, these investors are well positioned to to reap the benefits of the ADU development.  Homeowners often get shut out because the retail financing system hasn’t yet caught on to the economic opportunity that ADUs represent.  The retail system has a habit of treating ADUs as things with trivial value.  I wonder what it would take to change that.

The contrast is sad, because it is true that the main harvest commercial investors are interested in is money. Meanwhile, homeowner-developers, the kind who would become owner-occupiers, are typically interested in both money and providing housing for a family member or friend, which is a more expansive, community-oriented goal.

So, can we make any judgment about whether Portland’s permissive attitude has led to the decline of its neighborhoods?

I think that so far the neighborhoods are safe.  Despite the fact that a lack of relevant restrictions has led to 36% of ADU developments being non-owner occupied, I’m not aware of any complaints about the effect of legal ADUs on neighborhoods.  Frankly, I haven’t heard a peep.

That suggests ADUs are living up to their potential as low-key infill development — they seem to be rather hard to notice.   Rather, the major brouhaha over housing in Portland neighborhoods has been objection to large apartment blocks built with limited parking space.

I also think a key assumption of anti-ADU arguments like the LCC’s might be on shaky ground.  Is it reasonable to assume that owning and occupying a property confers a greater willingness to contribute to community quality of life? There are plenty of run-down areas where ownership is the rule, yet things go unpainted, and the grass goes uncut.   Meanwhile there are lovely neighborhoods (say, Park Avenue in Manhattan) chock full of renters paying to distant corporate landlords.

I’m hardly in favor of absentee landlords, but so far there’s no evidence they are threatening neighborhood values (economic or social) with dastardly ADUs.   I’d hazard  a community is made by the people in it and their economic and social connections. The mode of paying for housing is just one part of that — even if you pay to a landlord with a mustache as sinister as Sir Mulberry Hawk’s.

This entry was posted on May 29, 2013 by Martin John Brown in News, Policy & Trends and tagged activism, community, featurepost, nimby, oregon, permitted. 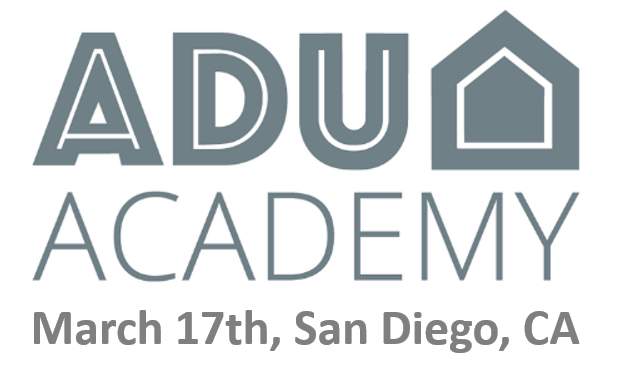