As a residential remodeling contractor, and owner of Craftbuilt Homes LLC, Joe was familiar with ADUs and their potential to generate income. In the late 1990s Joe was designing a home for himself. His initial plan was for a house above a three-car garage. The entry door for the house would have been offset to the side and set back from the garage.
However, around 1999 the city of Portland came up with a “snout house ordinance,” which basically said that a garage could not dominate the front of the house. So Joe had to shrink his garage down and move the living portion of the house forward of the garage. When he did this, the house ended up having more square footage than he required, so he was inspired to create an ADU in the lower level of the house.

“We felt it was worth the extra expense to add the cost of ADU to the construction loan. When I got my construction loan the ADU was not even questioned. It was on the plan.” -Joe Hermanson 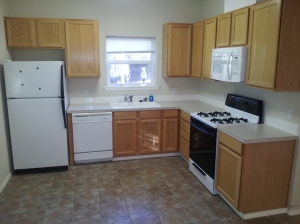 Joe wanted to provide a private entrance for his tenants. The ADU has its own walkway and stairs on the side of the house, so it looks and feels separate from the rest of the house. There were a few challenges in designing and building the ADU; however, they were fairly easy to overcome.

“I couldn’t use the same furnace as that would have mixed the air from both dwellings.  The other issue was noise. Since my furnace room is adjacent to the ADU, the separating wall had to have a certain sound rating. It basically required two layers of drywall and insulation.” -Joe Hermanson

Joe’s plan for his property was to live in the primary dwelling and rent out his basement ADU. So Joe was pleased that his ADU was rented within two months of moving into his new home. Rent from the ADU covers half of the mortgage and half of the property tax payments. The ADU has plenty of storage space, though Joe says he might have made the ADU’s bedroom a bit bigger.

The only drawback from Joe’s perspective is that sound transfers between the units. The joist system between the house and the ADU is insulated and the ceiling in the ADU was fastened to a metal channel to help prevent sound transmission. However, sound still carries between the units because the house has hardwood and tile floors instead of carpet. It’s been an adjustment for Joe to remember to keep the noise down. He says if he had it to do over again he’d use a different insulation material with better sound-deadening properties. (For more about soundproofing for basement units, also see Derin & Andra Williams’ ADU: An Energy-Efficient Basement Apartment.)

Overall Joe is happy with his investment in the ADU. He finds that the ADU itself is low-maintenance and managing it has few hassles. He plans to continue renting the ADU out to tenants for the foreseeable future.

So what advice does Joe have for homeowners considering creating an ADU on their property?

“Do it. The project was well worth doing.” – Joe Hermanson

One comment on “Joe Hermanson’s ADU: A Daylight Basement Rental”