[This is part 3 of a 13-part series on research and policy about ADUs.  For the series intro and table of contents, see here.]

It may seem odd to question whether ADUs actually provide housing, since practically everyone who talks about ADUs, whether they are advocates or critics, talks about them as housing.

But it’s a critical assumption.  In practicality there is little to stop ADU owners from using ADUs as offices, art studios, short-term rentals, extra living space for the themselves, etc.  In a civic debate in Davis, California, an affordable housing advocate, who was skeptical about ADUs, said, “A large percentage of them [ADUs] are used as home offices.”

If that’s true, all the arguments about the pros and cons of ADUs as housing could be moot.

So that was the first question I looked at when I analyzed the Oregon DEQ’s survey of the state’s ADU owners.  Here’s what Portland ADU owners said they were doing with their ADUs: 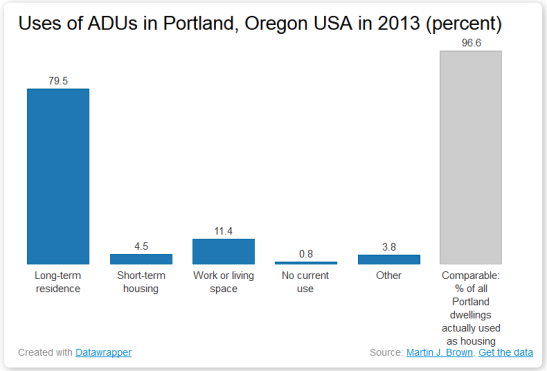 Some perspective is needed here.  Alternative uses are possible for any housing form — do ADUs tend to have them more often than, say, single family houses?   The American Housing Survey file for Portland has some relevant information.  It relates that in 2011, of all 255.5 thousand housing units in Portland, 96.6% were in use as housing or available as housing through sale or rental.  (For details, see my paper.)

It is interesting to think about the 20% of ADUs that are not used as housing.  They might be a kind of latent resource, an untapped reservoir of housing. These dwellings are already built and permitted, and can be turned from offices, workshops, etc, into long-term rentals immediately if owners become motivated to do so.

Such scenarios have already been contemplated by many ADU owners.  The survey asked ADU owners about past uses, and possible future uses.   33% of those currently using their ADU for an alternative purpose plan to use it as a long-term residence in the future. Similarly, 10% of those currently using their ADU as a long-term residence plan to use it for something else in the future.

“Our ADU really gives us added flexibility,” wrote one respondent in the open comments of the survey, “from guest space for friends to long term use by neighbors reconstructing their own house nearby (lived in the ADU for 2.5 years) to its current use for supplemental income [as] a vacation rental.”

So, to sum up, while Portland ADUs are more likely to have alternative uses than other housing forms, the great majority (80%) are nonetheless used as long-term residences.  This one basic premise underlying arguments about ADUs, pro and con, seems to be on solid ground. Whew!

However, the ability to change uses, from office to rental to whatever, seems to be part of the attraction for the homeowners that develop ADUs.  This is a crucial detail that will merit some more discussion as this series of posts goes on.

See you next week!

next week: how much do ADUs cost to build?

This entry was posted on June 18, 2014 by Martin John Brown in Policy & Trends and tagged featurepost, research, survey.