The City of Portland (Bureau of Planning and Sustainability) regularly reviews and updates planning and zoning codes through a process called RICAP (Regulatory Improvement Code Amendment Project). Part of the current RICAP process focuses on “Accessory Structures”. The first part of this post is intended to summarize some information about these updates. At the tail end, I’ll give a little editorial assessment of them.

The proposed code changes are for “accessory structures” at large, and therefor apply to detached ADUs, detached bedrooms, garages, studios, and other accessory structures. For a thorough review of all of the proposed changes, you can read through the documents posted at www.portlandoregon.gov/bps/ricap.  The proposed updates are partially based on developing standards that address some of the chronic adjustments/variances that have been sought for ADUs in recent years.

Because we at AccessoryDwellings.org distill and assess ADU information for your reading pleasure, I’m providing a brief synopsis of the changes as they pertain to detached ADUs. Additionally, I’m linking here to a distilled 6-page version of the changes that I’ve developed as a handout for my ADU classes. If you’re a homeowner, you can share this handout with your designer. Or, if you’re a designer/builder, you can use this handout to convey the proposed changes to a prospective homeowner client.

The proposed Accessory Structure code updates go through a public comment comment period and then eventually go through a vote before City Council before being adopted into code. This vote is likely to take place in late fall/early winter of 2015/2016. So, it’s possible that there will be changes to the proposed language and it’s also possible that these measures will not be adopted at all. 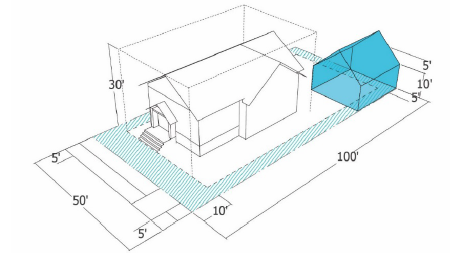 My editorial assessment of the proposed changes

While planning/zoning staff at BDS can’t speculate, I can. My take is that based on the generally positive feedback that the changes have received during the public comment period, they are likely to pass into code. Of course, it’s hard to predict what political factors may arise before City Council votes on them, but I think it’s a fair bet to think that these changes will pass.

Therefor, if the changes have a potential to result in a significantly better project for you on your property, I would consider waiting till these changes pass. Of course, with the SDC waiver set to elapse on July 31st, 2016, by waiting till December of 2015, you will be putting yourself into a tight time window during which you can submit your designs to BDS and take advantage of the SDC waiver. And no, we don’t know know whether the ADU SDC Waiver will be extended, so to be safe, proceed with your ADU planning as though the SDC waiver will not be extended.

I was in a focus group that helped to scope out the changes, so I may be biased here. But, I think these proposed code changes are great for ADUs.

They’re not revolutionary updates to the ADU code; they’re incremental changes. For example, they don’t go so far as to allow for 2 ADUs on a property (internal and external), they don’t allow an ADU on a property with a duplex, they don’t allow for tiny houses on wheels to considered an ADU or a habitable accessory structure. And it would be nice to see some of these more significant changes adopted. But, as far as incremental changes go, these are very good ones.

1) The biggest change (deliberate or not) is the new incentivization towards smaller ADUs. Using these changes, you can A) build within the 5ft setback, effectively preserving more of your backyard for the use of both the main house and the ADU occupants and B) you no longer have to visually match the main house.

This code change creates a double incentive towards smaller ADUs, which necessarily have the likelihood to be more universally accessible (eg. no steps), and which, by virtue of their small size, necessarily have a lower energy and material resource footprint.

2) Whereas “prefab” designs are not possible with ADUs currently due to the design matching requirements, this set of changes opens up that possibility for ADUs that are 15′ or less in height.

What I don’t like about the prefab ADU concept is that the design is not necessarily contextualized architecture (ie. it could be off-the-shelf designs from students in China who have never seen your property). There will inevitably be a large consumer demand for the cheapest “ADU model” under these code changes.

What I do like is that there is the possibility for someone to develop a more affordable, scalable design, which could theoretically lower the barrier to ADU entry for many homeowners who can’t afford a custom ADU design/build on their property. Given that these designs would likely be a) very non consumptive and b) likely universally accessible, I’m ok with sacrificing my aesthetic preference for contextualized, customized designed in favor of the broader social benefits that are incentivized here via these code amendments.

3) The design matching requirements for 2 story ADUs is being liberalized significantly. While my bulleted synopsis above doesn’t cover this, the 6 page handout does (on page 6.) While there are still some limits on  >15′ ADUs, the codes will be liberalized for the roof pitch, exterior finish materials, window, trim, and eaves. This flexibility will allow for architects to be more more creative with the exterior look and feels of all ADUs.

4) Going from an 18′ to 20′ height limitation for ADUs that are not within the 5ft side or rear setback, will prove incredibly useful for homeowners who are going up two stories. The 18′ height limit has always proven to be just a hair shy of what makes for a comfortable staircase layout. Adding 2 ft to the height limit doesn’t seem like a big deal, but it should result in more easily designed floorplans for ADUs.