This might be the “deepest” post in my whole series about research and policy on accessory dwelling units.   Though ADUs and affordable housing are often mentioned in the same breath, a closer look at this pairing seems to demonstrate a weakness, not in one policy position or another, but in the whole discussion about affordable housing itself.   It takes some work to see how ADUs even fit.

Ultimately, I feel the evidence shows ADUs have tremendous potential for creating  reasonably priced housing.  Studies in two cities indicate that, without any regulation or subsidy, 15-20% of ADUs are occupied for rents that are zero or far below market rates.  But governments and activists need to take time to understand how this form of development is unique.   In particular, it is a mistake to assume that the homeowners who create ADUs have the same skills and goals as professional developers.

But that’s jumping to the conclusion.  Let’s start at the beginning.

Pretty much everybody in America seems to agree that affordable housing is a profound need.  In areas that are gentrifying (e.g. Portland), are dominated by Silicon Valley money (say, San Francisco), or are vacation getaways for the wealthy (say, outer Long Island), residents are getting priced out and leaving. There’s a certain irony to the process, in that sometimes these are the same kind of people that made the place interesting and attractive in the first place. This leaves the area filled with a narrower range of richer people, which might be a little less interesting.

Practically every argument in favor of ADUs touts affordable housing as a likely benefit.    It’s frequently assumed, even by opponents, that ADUs are affordable housing.  For example, a NIMBY-style argument would be that ADUs could bring in undesirable low-rent characters that will bring property values down.  At least one local government (Davis, California) believes the affordability argument enough to resolve that ADUs will automatically qualify as partial contributions towards regional affordable housing goals.  Is that a fair assumption?

It’s hard to test, because “affordable housing” can mean a lot of different things. Are we talking affordability for the renter? For the owner? For the government? Are we talking rents, or construction costs?  There is no avoiding it — we MUST get into the weeds to have a meaningful discussion of this topic.

In general parlance, “affordable housing” just means housing that has a price that is manageable in relation to income.  No numbers or statistics are attached to this, but most people get the general sense of it.

However, to people in government and housing advocacy, “affordable housing” means something much more specific.  It refers to a particular set of subsidized rent programs, and the associated institutions and housing developments that take part in those programs.  Renters pay some income-adjusted sum of rent to the landlord, and the landlord often receives government subsidies for the renter on top of that.  The rules are complex, and the landlords are necessarily institutions (some non-profit, some for profit) who are willing and able to deal with that complexity.

But are those programs really the only way housing can be made affordable, the way that a regular person would understand that word?

ADUs are certainly one intriguing possibility, but they don’t fit into the institutional view at all.  The people that develop ADUs are not big landlords or nonprofit corporations who are willing and able to deal with complex rules and obligations over decades.   Though there is occasional suspicion that ADUs are being built by “wealthy individuals” (see the comments on this BikePortland story), in Portland, ADU developers seem to be fairly typical homeowners who worry about their own housing costs.  A first approximation suggests that ADU homeowner-developers in Portland have similar incomes to other homeowners, at least before they develop their ADUs (page 42 of my research report).  Additional income from rent is the single biggest motivation for creating ADUs (page 40), and many anecdotes communicate that income from ADU rent has helped household finances.

Advocacy for ADUs often attempts to straddle the renter-owner divide, by claiming in a general, hopeful way that both sides can benefit simultaneously.   For example, the web site of the Puget Sound Regional Council writes:

“In expensive single family dominated areas, accessory dwelling units can also provide affordable housing choices. Most communities require an ADU to be smaller than the primary home on the property, and the smaller size can reduce the rental price of the unit. Monthly rent of the unit would likely be lower than a mortgage payment for a house in the same neighborhood… For homeowners, an ADU can be an additional source of income for property owners, offsetting the cost of home ownership.”

This paragraph works in two definitions.

1) from the renter’s point of view, affordable housing means a greater variety of unit sizes (and therefore prices) in a geographic area.  For example, in a neighborhood of large single family homes that rent for $1500 or $2000/month, ADUs could add some basement apartments that rent for $700/month.

Neither of these definitions specifies a magnitude of cost or savings which makes things more “affordable.” There also is little acknowledgement that affordability for the renter and owner could conflict.  A house with an ADU might turn out to create cost savings for both owner and renter — anecdotal reports suggest that it often does — but it’s not guaranteed.  Perhaps the owner takes an outrageous rent because they can get it (making things less affordable for the renter, but more affordable for the owner), or perhaps the owner borrowed too much to create their ADU, and both renter and owner are spending too much.

A more pragmatic, precise definition of affordability has been used in a few papers which have actually studied ADU rents.  ADU rents can be defined as affordable if they are simply less than the going market rate for similar dwellings that are not ADUs.

Construction costs might be considered in affordable housing discussions as well.  The more expensive units are to construct, the less of them will probably be made.  So cheaper units should contribute to affordable housing in nearly every sense.  When public agencies create institutional affordable housing, the construction costs seem rather high — for example $253,000 per unit for one Portland development…. much higher per unit than ADUs developed with private money.  It should be acknowledged these are totally different kinds of construction, so the high costs may be reasonable in context.  However, at such prices it seems that such projects will serve very few people. They will not be the “whole solution.”

Finally, for perspective we should note that in some places, the affordability problem may be rooted in income, not housing cost.  Housing costs might be reasonable from the view of construction expense, etc., but if local conditions encourage low wages, then the cost to rent or own could still be beyond reach.  (For better or worse, it’s not the role of this blog to solve income inequality.)

So how do these concepts of affordable housing fare when tested with whatever data is out there?

Another view: ADUs have a high proportion of free and ultra-low cost units

None of the definitions examined above really bring out what I believe is the most interesting way that ADUs can be considered affordable.  It is visible in the distribution of the rents residents of Portland ADUs were paying when the owners were surveyed by the Oregon DEQ: 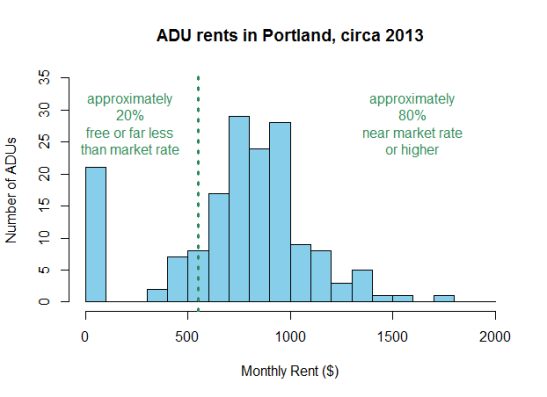 The average rent here is $765/month.  When these kind of ADU rents are compared to similar non-ADU rentals, there is no statistical difference in averages (see the research report for details).

However, the averages aren’t the story — rather, the story is the lower end of the distribution.  13% of ADUs are occupied for zero cash rent, and another 5% are occupied for <=$500/month, extremely low rents for Portland in my experience.  If you make the arbitrary rent dividing line a little higher than $500, the proportion of free or ultra-low cost units easily reaches 20%.

This figure is no fluke — a survey in the Bay Area showed a similar number.  There, 17% of (mostly unpermitted) ADUs are occupied for zero cash rent.

This is a remarkable finding, because it shows that the homeowner-developers behind ADUs are not acting like professional real estate investors.  With zero subsidy or regulation, they are choosing to receive far less than market rent, in a real estate market where many could make four figures monthly.  They are choosing to prioritize something other than financial return.

While it is no surprise that, in Portland, the great majority of these free-or-ultra-low cost units are going to friends and family, the affordability of these units is still quite real.  For example, one ADU houses a grandmother on a fixed income.  If she were not housed in the ADU, she would probably require public assistance for housing.

This suggests that governments could encourage affordable housing simply by allowing ADUs to be built.  With no regulation or subsidy, about 15-20% of the units will be affordable by nearly any definition.

All this “free” (to the government) affordable housing does come with a trade-off.  Besides the likelihood that free-or-ultra-low cost units will go to family or friends, if the owner is living on the property, the house+ADU arrangement is so small it would be exempt from the Fair Housing Act.  For this reason alone ADUs cannot be the whole solution to the affordable housing problem.

There may be a temptation, on the part of governments or activists, to “improve” the affordability characteristics of ADUs by allowing ADUs only with a long list of requirements for rent prices and/or fairness.  I feel like this would be counterproductive.

Such requirements have been tried — for example, in the Dual Unit Opportunity program, and in Santa Cruz’s public financing option for ADU developers.  Neither got a strong response or created notable numbers of “obligated affordable” ADUs.  In Santa Cruz, the homeowner-developers of ADUs chose private financing over the public program, and avoided the extra requirements.

Moreover, the many case studies on this web site, as well as comments on the DEQ’s survey of Oregon ADU owners, suggest that ADU owners cherish the flexibility inherent in the housing form.  They can choose to prioritize money-making at some times, and to prioritize other things (usually family or friends) at other times.    Restrictions in the way ADUs can be used would probably seriously discourage their creation.

ADUs are fascinating in that they are a “grassroots” style of development.  The developers are not usually professional real estate investors, but simple homeowners.  These homeowners have changing priorities and requirements, and — to the community’s benefit — do not always choose to maximize financial return.  Affordable housing is created as a byproduct of the flexibility inherent in the housing form.   Reducing that flexibility reduces the incentive to create an ADU in the first place.

So — to sum up — ADUs do create affordable housing, but not in the usual institutional way.  The affordable housing ADUs create is unlike the product of the affordable housing industry.  It is totally voluntary and unguaranteed, and the way it is made available will not always be fair.  For these reasons ADUs can never be the entire solution to the affordable housing challenge.  On the other hand, ADUs are extremely economical to construct per unit, cost the government little or nothing to allow, and — given the number of single family residences in US cities — could be incredibly abundant.

Perhaps best of all, ADUs are individualistic and creative.  All impressions are that they add, in a small way, to family and neighborhood connections.   They could be the opposite of boring gentrification — they might actually help make a place interesting enough to live in. 🙂