The Ascent of ADUs in Portland

Portland is leading the charge in ADU development nationally. Data provided by the City of Portland shows the impresssive growth rate of ADU permits issued from 2010-2016. 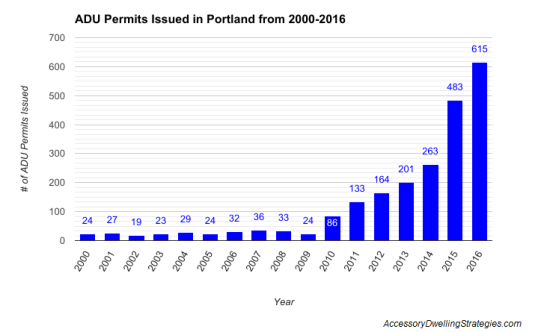 In 2016, 616 permits were issued, 20 times the average number of permits issued each year before Portland’s SDC waiver in 2010. Without a doubt, the SDC waiver has played an invaluable role in increasing public interest in ADU development following the Great Recession of 2008.

The total number of ADU permits issued in Portland is roughly 2,200. Of those, roughly 1,500 ADUs have actually been completed. Based on historic averages, 85% of those 2,200 permit holders will have completed their ADUs by the end of year. So, by January 1st, 2018, Portland will have roughly 1,900 ADUs on the ground.

There’s incredible opportunity and untapped potential for more small housing in back yards and basements in Portland.

ADUs are fairly new to the housing scene, and development pathways are getting established, and new ones are being explored.

While some designers and builders are working on 10+ ADUs a year, many are just now starting to get their feet very wet with ADUs. Realtors are getting trained in how to assist homeowners in buying and selling properties with “ADU potential”. Lenders are starting to come around to the prospect that there is a market need to be filled, and figuring out how to best assist homeowners who require daunting amounts of liquid capital to actually pull off building these ‘little houses’ on their property. Meanwhile, novel development models and initiatives and specialized small businesses are emerging to support ADU growth. It’s exciting to witness.

This fall, we’ll be running another city-wide ADU tour on September 9th and 10th, 2017. This will be the last ADU tour before the SDC waiver is set to expire for ADUs in July, 2018, so we’re gearing up to make this the biggest ADU tour we’ve ever run.  I’ll post more about the tour in the coming months on AccessoryDwellings.org.

I’m in the home stretch of writing and publishing a book about ADUs, which I believe will be the first and most significant work of its kind. The book is written explicitly to assist homeowners in developing an ADU on their property, to help advocates and politicians unshackle their cities from onerous ADU regulations, which can allow permitted ADU development to flourish much as it has begun to do in Portland, and to help small businesses develop a start-up ADU cottage industry in their city.

Among other things, this book interprets and analyzes the success of steep adoption curve of ADUs in Portland, and attempts to explain exactly why we aren’t seeing this same phenomena in other US cities. It’s not just the SDC waiver that has helped ADUs to emerge in Portland, but the SDC waiver has proven to be pivotal.

And it will also explain why, in the city that is leading ADU development nationally, ADUs are nonetheless present on only 1% of eligible residential properties.

In the months leading up the book launch, I’ll be sharing some of the book’s key findings on AccessoryDwellings.org.

Meanwhile, sign up to receive a free 12-page PDF of pithy reference material, as well as other useful resources about building an ADU and get notified when the book, Backdoor Revolution: The Definitive Guide to ADU Development, is available.

19 comments on “The Ascent of ADUs in Portland ”

This entry was posted on February 27, 2017 by Kol Peterson in Policy & Trends, Uncategorized.