It is great to see incremental improvements being made to regulatory ADU codes across the country. Austin, TX recently made some improvements to their ADU code, making ADU development more plausible there.

Here is the 102 page description of the regulatory design changes that passed. And here’s my six page downloadable abridged version of the salient changes that pertain to detached ADUs (it’s also embedded below).

Commissioner Fritz had proposed a late amendment that would have prevented ADUs being built within the 5ft setback, but the amendment did have sufficient support, and she withdrew it before the vote. The vote for the update package was 4-1 , with Fritz dissenting. You can watch the 6 minute video here.

It’s a simple, elegant update that has the potential to incrementally change the face of the detached ADU market in Portland. I’ve already written an editorialized piece about these code updates, so you can read through that piece to understand what these changes may hearken.

Arguably, the most important change is the one that allows for small, detached ADUs to be built within the 5′ setback. This regulatory design change ‘benefit’ is compelling enough that many homeowner/developers will consider whether it makes sense to build an even 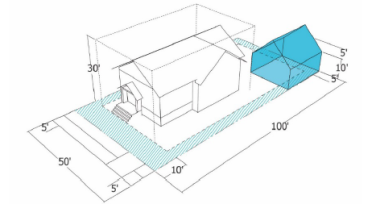 smaller ADU than they were previously planning to build.

For some context here, I’ll digress for a moment on the economics of construction. There is effectively a fixed price to building any new detached habitable unit such as an ADU. Typically, when developing a detached habitable unit, additional square footage is the cheapest part of construction. This is partly why we see so many over-sized homes being built nationally.

So, to advocates of small, affordable, infill housing, it’s refreshing to see a policy that actually provides some regulatory benefits to building smaller, such as this one. The ‘benefit’, in this case, is being able to build within the 5ft setback. It’s notable that this same ‘benefit’ has already been in place for garages. This regulatory code update simply expands this benefit to all other accessory structures.

It’s too early to say whether this code change will result in more ADU development. What we know for sure is that these codes will make detached ADU site planning and design-development slightly less specialized and nuanced than it has been historically in Portland. Making building ADUs easier is a good thing for affordable housing.

Zoning codes in many places prevent the development of ADUs. Overly restrictive ADU codes are probably the single biggest barrier to ADU development nationally. For other cities seeking to incrementally improve their ADU codes, we’ve provided a model ADU code in a previous post.

This entry was posted on December 2, 2015 by Kol Peterson in Design & Build, News, Policy & Trends.