What seemed to be a ‘slam-dunk’ set of great, proposed code updates for detached ADUs and other accessory structures have experienced yet another potential setback, so to speak.

The day before the vote to approve the much anticipated Accessory Structures Zoning Code Updates, Commissioner Fritz put forward a last-minute amendment that would cripple what many perceived to be the most important aspect of these updates.

The 11th-hour amendment would have removed the provision to build short and small ADUs within the 5′ setback, subtly discouraging smaller, more affordable ADUs in Portland.

Here are the four words of the amendment in bold.

In the R7, R5 and R2.5 zones, detached covered accessory structures other than water collection cisterns and accessory dwelling units are allowed in the side and rear building setbacks if all of the following are met:

Upon initially reading the amendment from Commissioner Fritz, the voting members of the City Commission were apparently initially fine with accepting her seemingly modest proposed amendment.

I was pleased to vote unanimously with my Planning and Sustainability Commission colleagues to recommend the Accessory Structures zoning package to you. It provides a much-needed rationalization of regulations for structures other than principal residences.

One guiding light for me in this project was the idea that it should be as easy to build a structure to house people as it is to build one to house automobiles.

That’s why I was dismayed today to hear that there may be an amendment proposed to increase setbacks for ADUs, once again making it easier to build a garage for a car, than a home for people.

I would strongly urge you not to adopt such an amendment. In my view it has no basis in sound policy, and in this time of housing crisis we don’t need regulations to make creating new housing units more difficult.

1) Commissioner Fritz was against accessory structures being built within the setback in general. This is an academically debatable topic, but the reality on the ground is that garages have always been allowed to be within the setback. And apparently, that hasn’t proven to be a problem for neighbors.

In fact, the Accessory Structures Zoning Code Updates were explicitly crafted to account for the visual impact of the no-setback allowance by limiting the height of new are structures within the setback to 15′ and their length to <24′. Indee, this 15′ height restriction was developed explicitly to account for the same concerns raised by Commissioner Fritz.

But I’m guessing that since the City’s own planning and zoning staff proposed these changes to begin with, it has probably not proven to be problematic to neighbors to have these ADUs within the 5′ setback.

3) Commissioner Fritz’s concerns appeared to be based on a fear of the visual impact of having two ADUs abutting a property line. While this ‘courtyard walling effect’ is theoretically possible with small detached ADUs under this new code, it is also already possible for this to occur with two garages in the setback.

Compared to the number of garages, there are very few ADUs overall in Portland. There are only 1,200 ADUs in Portland, due largely to the daunting capital cost associated with developing them.

The probability of two detached ADUs being built in the manner that Commissioner Fritz fears is far lower than probability of Portland already having properties with garages adjacent to one another within neighboring property’s setbacks. Following the logical extension of this rationale, the City’s Bureau of Development Services compliance staff would certainly know if this issue of two adjacent garages set within a setback has actually proven be a common problem for lots of people to date, or whether it’s ever cropped up for anyone at all.

My point is that Commissioner Fritz fear is seemingly unfounded, and it would be unfair to detain a very good affordable housing policy as a result of an unfounded fear.

4) There’s a recognition that we live in a city, and that that means we need housing. ADUs are incredible grassroots way to create a unique housing stock developed by average people, not corporations. Citizens and officials should be proud of the nationally unique accomplishment of now having 1,200 ADUs.

But, it’s only 1,200 ADUs. That’s not very many ADUs in a City that has currently has 500,000 people and 250,000 habitable units. The City projects that ~120,000 new units are needed in the next next 20 years to accommodate 250,000 new residents. ADUs are allowed in residential zones, and they offer a good way for the City to help meet part of the housing shortages we currently face.

5) One of the overall purpose of these updates was to reduce the number of (expensive, time consuming) adjustments that are needed and unify codes, and Commissioner Fritz’s amendment does not help address this issue. A recent LA Times article about the housing crisis in Portland concluded with the statement,

“The best solution? Experts say it’s shifting policies to make building housing easier. And accepting change, including the city’s popularity and the fact that adding higher-density housing can benefit everyone.”

By making small detached ADUs easier to build within the setback, we are helping to make the right kind of housing easier.

Flipping the NIMBY Setbacks Argument into an IMBY Asset Argument

In the hundreds of properties I’ve visited where people are considering building detached ADUs, I’ve actually seen the situation that Commissioner Fritz mentioned a couple times with two garages and other small accessory structures in adjacent backyards. And, you know what, the visual appearance isn’t actually that bad. It results in a private courtyard for the individual who has two neighboring accessory structures.

So, a) the probability of this ‘worst case’ scenario is low and b) I don’t think this worst case scenario of a courtyard walling effect is actually all that bad in the first place.

To illustrate my 2nd point, here’s a picture that I just took of my backyard, in which a neighboring property has a small, detached accessory structure located within the 5′ setback. What this structure actually does is create a privacy buffer for me to enjoy a small, private garden courtyard in an otherwise bustling urban neighborhood.

My personal anecdote is just one anecdote, and this issue is probably site-dependent, but there certainly isn’t a definitive basis here for Commissioner Fritz to presuppose that adjacent structures within a setback are always a bad thing.

This adjacent structure is a good thing–the privacy afforded to me is actually one of the features that made me like this particular site in terms of developing my ADU. Indeed, I speak about this asset in all of my ADU classes in terms of what to look for in a good property.

And even if building ADUs within the setback was always a bad thing aesthetically, affordable housing advocates may argue that the benefit of many more, smaller, affordable ADUs is a greater policy goal than the aesthetic drawbacks that this regulatory change could theoretically create.

ADUs are not your typical form of development. Unlike speculative development being done by faceless corporations, developers of ADUs are primarily homeowner developers who have a vested interest in maintaining good, long term neighbor relations. Decisions like where to place smallish structures are best left to the homeowners who are going to be living with the decisions for a long time.

Context for the Affordable Housing Rationale Behind Supporting this Particular Provision

When building a home, there’s effectively a fixed cost for development of $60-70K. The cost for each square foot you add, “the marginal cost” is relatively cheap. Thus, the rational approach when developing, inevitably leads to larger home development where zoning allows. This is in part why “tear-downs” of small houses are now being replaced all over the city with large homes. 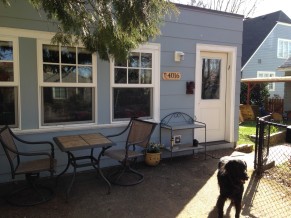 This an image of the garage conversion ADU is an example of from the spring, 2015 ADU that was a $46K garage to ADU conversion, built within the setback.

The production and increased housing stock of very small units on residential lots, incrementally helps supply the form of housing that we are sorely lacking–the housing for the 2/3rds of our Portland population that live in 1-2 person households.

The common sentiment about the provision among thoughtful architects and policy wonks was, ‘Finally, there will be a regulatory incentive to build smaller‘. This code provision was actually the first code I’ve seen that incentives small structures. It’s truly unique in this way, and is why this particular provision is so key.

As far as cherry-picking ADUs as the one ‘use’ that should not be permitted in these small accessory structures within the setback, this seems antithetical to the policy goals of the Commissioners: affordably housing more people. These officials fully understand that we have an affordable housing crisis, and I’m certain that they understand that we should give equal treatment for habitat for humans (ADUs) to the habitat treatment we afford to vehicles (garages).

You can read some common sentiment in the BikePortland.org blog post about this same amendment.

Next Steps for those Who Care About Building Small, Affordable ADUs within the Setback

I’ve summarized the general proposed changes for detached ADUs within the Accessory Structures Zoning Code Updates in another blog post. To summarize the updates in one sentence, under these new code updates, you’ll still be able to build any ADUs that you can build today, but you’ll be also able to build to a more flexible set of design standards if you wish (ie. “… shifting policies to make building housing easier.” ) The updates appear to be liked overall by the Commissioners, which is great.

The amendment proposed by Commissioner Fritz would otherwise leave the rest of the Accessory Structures Zoning Code Updates unscathed. I was initially frustrated because I disagreed with Commissioner Fritz’s proposed amendment, I believe it’s ultimately fine that she opened another public comment period on this issue.

Here’s what Housing Commission Dan Saltzman had to say about the amendment.

There is an affordable housing crisis in the city right now, and we are slowly putting the nail in the coffin of Accessory Dwelling Units–we, the City and the County.

We plan to have our SDC waivers expire next year. The County has an interpretation on reassessment on property values when somebody builds an ADU that significantly increases people’s property taxes. And I think this amendment is only going to make, by requiring going through an adjustment committee, one more, as I said, nail in the coffin of a viable option that’s not being used for Airbnb purposes only.

These are people living, older relatives, housing aging parent, housing haven’t made it on their own yet. So, I think there’s a lot of valid uses for ADUs and we’re slowly killing them off. So, I respectfully will oppose this amendment.

The follow-up hearing and vote on the Accessory Structures Zoning Code Updates will occur at 9:45am on Wednesday, December 2nd. However, the City Council encourages written testimony in advance of this hearing and there may not be any opportunity for oral testimony. So, send your comments to commissioners directly. Or, just write your comments below if you’d like.

6 comments on “The Accessory Structures Zoning Code Update- The Vote”

This entry was posted on November 18, 2015 by Kol Peterson in ADU Professional Profiles, Policy & Trends.