Regan Gray and her partner George Okulitch first learned about ADUs in 2010 when they read a press release about Portland’s waiver of System Development Fees (SDCs) for ADUs.

“I had been looking for something to do with the house. It’s a house that my husband and I lived in for 5 years before we moved across town. Then it was a rental, but the market crashed and it wasn’t worth what we paid for it. We were loosing money each month so we were looking for a way to increase the square footage and the value whether we rented it or sold it. Portland has a tight rental market and we have more renters than we do homes. I quickly learned that the property would bring us in more rent if we had an ADU, too.” -Regan Gray

Regan explains that one of her greatest inspirations for creating an ADU was preserving the character of her neighborhood.

“I was seeing houses like my rental house being torn down. It’s a small house on a large lot on the front half of the property. Most developers drive by and they think ‘ooh, condos!’ That type of development was what was popping up all over the neighborhood. I hated the idea of selling the property and having the house torn down. What I really like about the ADU is that we created more housing, but it’s hidden in the back and it doesn’t change the look and character of the neighborhood at all.” –Regan Gray 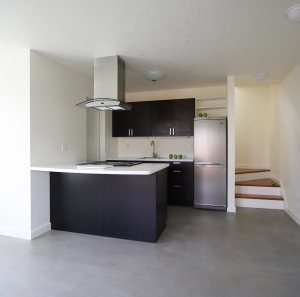 Meanwhile, Hammer & Hand – a Portland, OR green building company – was also interested in exploring ADUs as an infill housing option. Shortly after reading the press release published by the City of Portland, Regan and George found another press release, this one by Hammer & Hand.

“I was looking at how to increase the value of the house and they were looking at it as a marketing tool to build more ADUs.” –Regan Gray

“My husband and I came up with $40,000 cash and took out credit loans for the rest. We planned to spend $80,000 on the project. When it ended up being more expensive, Hammer & Hand financed us, so we had a loan with them.” –Regan Gray

As they developed the design for the ADU, they balanced several considerations. Rental value was key, so Regan kept asking herself “What are tenants going to want to see?” She landed on a clean, crisp look with stainless appliances and a modern bathroom with a rain shower. Although many ADUs contain only one bedroom, George and Regan decided they wanted to create a two-bedroom ADU to improve rent-ability. In order to maximize space, the designer tucked the toilet under the stairs. Like many lots in the Concordia neighborhood of Portland, their property abuts an alley. So they decided to locate the ADU as far back on the property as possible so that it can be accessed from either the alleyway or the street. 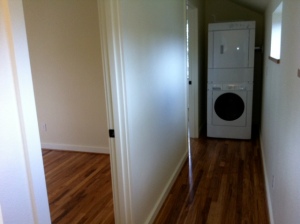 Sustainable design was another primary focus. In order to showcase green building techniques, the ADU was built following Passive Haus standards. The Cadet heaters rarely run and there is no need for air conditioning. Regan is proud of the reclaimed hardwood floors and the look of the glulam beam against the vaulted ceilings.

“Dan at Departure did a really nice job of making it feel big by bringing light into the space. The concrete slab is poured over giant foam slabs to keep the chilling effect from the ground from coming up. We put that same high-density foam in the walls and the ceiling. The house has a really tight envelope. We were looking at how to minimize water use, electrical use, and lower the carbon footprint. We are 1/10th of a point away from the Passive Haus standard. It was the first one Hammer & Hand had built. The front doors are an accordion system and they’re all glass. That’s probably where we’re loosing some of the air. The next time around they hit the mark, but they had to buy windows from Germany!” – Regan Gray

The team faced a few regulatory challenges in their design-build process. Regan explains that since their ADU included several pioneering sustainability features the architect and builder worked with the City of Portland to address challenges and concerns. Dan at Departure Architecture drafted up the plans hoping to replicate this ADU around the city. However, because Portland has a requirement that a detached ADU match the primary dwelling, changes to roof pitch and other exterior elements made it difficult to replicate affordably.

Financing was the biggest frustration Regan and George faced with regard to their ADU. (Check out the new Guide to Financing an ADU for more information about financing options.) 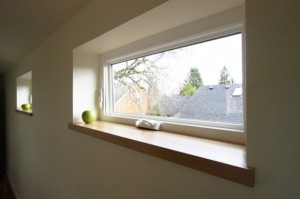 “Here’s my biggest pet peeve. Banks aren’t doing construction loans and people are having to come up with cash. Lenders want to count how much the property is worth now, not what it will be worth once the construction is done. A large local bank came to all our showings and advertised they would do construction loans for projects like this. However, when we tried to do this again that bank said they don’t really do that. I understand the bank’s perspective. If they give us $100,000 because we say the property value will increase, but it doesn’t appraise that high, they don’t have the collateral. The trouble is there aren’t a lot of comps and appraisals aren’t done correctly. Sometimes the ADU is counted as a garage. Other times, as additional bedroom and bath. What isn’t taken into account is that this is an additional home. They should appraise the property like a duplex or commercial property, not single-family. When our property was appraised after the ADU, we only saw a $60,000 increase, not even covering construction costs. If they had treated it like a duplex or commercial valuation, we would have seen a $200,000 increase. The lending industry just hasn’t caught up. The only way for a home owner to pay for this is either using existing equity in your home or save up over $100,000 to pay for construction.” – Regan Gray

(For more about different valuation methods for ADUs check out A Practitioner’s Guide to Appraising ADUs.)

Despite the frustrations they faced during the financing and design process, Regan and George are pleased with how well their ADU has been received. The ADU was featured in a Jetson Green article in April 2011. Both the owners and the design-build company have shown the house on several tours, including the 2011 Build It Green Tour. (You can read about Hammer & Hand’s take on featuring the ADU on the BIG Tour.

“The highlight is how much people fell in love with it. My biggest surprise was that the neighbors really weren’t concerned. Our construction workers were really respectful. There was a lot of interest and wondering ‘how can we do it, too?’ Besides the financing, everything else we planned really well. I had this vision of making sure there was adequate privacy. It’s cooler than I thought it was going to be. It’s really unique in the neighborhood. It’s a little house tucked in the back. It’s got modern amenities on the inside. People get to live in an older neighborhood with modern amenities. I’ve never had a vacancy. Not even a day!” – Regan Gray

Regan and George currently rent out both the primary dwelling and the ADU. (Portland is one of the few cities that allows homeowners to rent out both units.) Regan explains that the tenants in the house and ADU don’t interact much because the two units were designed to be private. Other than sharing recycling and compost bins with the tenants of the main house, and getting mail from their mailbox at the front of the primary dwelling, the ADU tenants are fairly autonomous.

“There have been tenants who say they can’t take it because there’s not enough storage. However, the people I’m attracting with the ADU want a small footprint. They want to force themselves to live in a smaller space and spend more time outside. And since they’re living right off Alberta it’s easy to do.” – Regan Gray

When considering their plans for the property in the future, Regan appreciates that they have lots of options.

“We keep it as our back up. When our girls are in college, if we can’t figure out how to pay for it, we can sell the rental house. Or we could sell the house we live in and live in the rental house or the ADU. Right now there are 4 of us and we wouldn’t fit well, but I’ve always wanted to live in the little 2 bedroom. It’s a safety net for us.” – Regan Gray

So what advice does Regan have for homeowners considering creating an ADU on their own property?

“Do it now while the SDC fees are suspended! Also, think about what kind of ADU you’re doing. Do it for rental value and not for increased value. We tried to do a basement ADU at our residence that we live in now and we came across a lot of problems in terms of cost and return. It costs more to do an ADU in a basement, but it’s not worth more because of the lack of light and the stigma. I would really like to see more thought on how to do basement ADUs, figuring out how to utilize these basements all over town.” –Regan Gray