When Isabel Johnson first learned about ADUs it occurred to her that converting her 1950s garage into living space would increase the property value. She was single at the time and liked the idea of renting out her primary dwelling and using the ADU as her home base while she traveled.

The garage conversion became more appealing in the spring of 2009 when Isabel learned she was going to be an aunt. Her sister and husband were expecting a baby to arrive in August 2009 and Isabel’s parents decided to spend a few weeks in Portland to assist with the new addition to the family. Isabel decided it was time to transform her garage into a little backyard cottage.

Isabel was inspired by the other garage conversion projects she had seen. The garage is in the northeast corner of the lot and it’s visible from the street, so it was important to Isabel that it fit into the neighborhood. She worked with designer Robert Liberty to develop a design for the little house. The primary considerations were bringing light into the space and making graceful transitions between the house, the yard, and the ADU.

“I wanted the ADU to match the house. I have a bungalow that has two big windows on either side of the front door so I chose a window for the front of the ADU that matches the house.” – Isabel Johnson

The ADU design included three windows looking into the garden and two skylights to bring light into the ADU. The bathroom, located in the northeast corner of the ADU, does not have windows for privacy reasons, but the skylight captures light from above and bounces it off the tile shower. In addition to the interior, Isabel consulted with her sister, a landscape designer, on an outdoor landscape plan for the cottage.

Isabel wasn’t particularly focused on sustainable design features as she developed the ADU because the space was so small. She knew it would be fairly easy to heat and cool. (In fact, a 2010 study by the Oregon DEQ shows that building small is the single most effective green building strategy.) The little house is well-insulated and Isabel explains that the ductless mini-split heat pump heats and cools the ADU very efficiently.

First phase of work for Jason Siri of Siri Construction was raising the height of the roof while keeping the existing rafters and roof framing. They reused as much of the material as possible during the conversion, but all structural elements were new lumber.

“The highlight was when it was finally done and we took pictures. I do think it’s a beautiful space.” –Isabel Johnson

During the construction process Isabel faced three major frustrations. First, she ordered her custom front window once the plans were signed-off by the city, but when the inspector came out she was told she couldn’t have a window there and had to have a fire wall instead.

“We were able to put the window in with fire blocking, but it was definitely frustrating. I didn’t expect you can have your drawings signed off by the city and then have the inspector veto it!” –Isabel Johnson

Second, Isabel didn’t anticipate that there would be so many decisions to make during the construction process.

“Making fixture and material decisions takes me a really long time. I am an accountant and I was working 55 hours a week during tax time and meeting the contractor on the weekends to make decisions. It was not the time of year to have something constructed! If you don’t know that stuff upfront it can add time to the project.” –Isabel Johnson 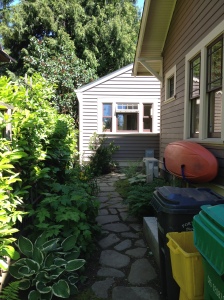 “It was nearly $9,000 in system development charges and the ADU is only 240 square feet! That was a big proportion of the total cost. That summer they waived the fees just as we were finishing up.” –Isabel Johnson

She anticipated that once it was complete, the backyard cottage would serve as a guest space for visiting family. However, she decided to go through the process of converting the garage to an ADU officially so that she could keep her options open. She liked the flexibility of being able to rent out the little space.

“My parents helped me with it so that they could stay out here. On the first 6-week stay in the little house my parents decided to move to Portland and bought a house here. Now we use it as a TV room and guest room. In some ways it’s set up like a hotel room that has a kitchen. You have a fold out couch, a closet, a tiny bathroom. It all works.” –Isabel Johnson

Isabel says that the ADU has served her well as a space for guests, but she finds that she isn’t necessarily getting out of her ADU what she put into it.

“It’s a beautiful space, but we don’t necessarily use it to its full potential. If I had it to do all over again I might not have constructed the ADU. I’m not really sure we’re getting the best use out of it and we’re paying a mortgage for a piece of property we’re not fully using. When you have guests it’s great because they have a space they can go to and don’t feel like they’re in your hair. But it’s overkill for our guests coming to stay. The ADU has more bells and whistles than what we use it for. It is permitted as an ADU and I could rent it out separately. If we were to rent it out full-time it could probably pay for itself.” –Isabel Johnson

Isabel explains that there are several reasons she and her partner Brad don’t use their ADU to the extent that they might:

If Isabel had the advantage of hindsight, she says she would have converted her garage to useable space in a simpler way, rather than making it into an ADU. She wouldn’t have put in a kitchen and she would have put in a simpler bathroom. (Check out Schuyler Smith’s post about a Detached Bedroom as Tiny House for an example of how this might work.) However, Isabel has enjoyed her ADU and the opportunity to share her experience with others considering building one.

“Friends of mine who come over love it. My friends are building an ADU right now and they’re asking me lots of questions.” –Isabel Johnson

Isabel says the biggest challenge about having an ADU on her property is how to accommodate storage when you’ve converted unfinished spaces into livable space.

“We don’t have storage space anymore. Once you remodel your basement and your ADU, where do you put your lawnmower? We have very little outdoor storage. It’s surprising how much stuff you can cram into a garage.” –Isabel Johnson

So what advice does Isabel have for homeowners considering creating an ADU on their own property?

“Really know what you want to use it for. Be realistic about the costs. Often construction costs more than you think it will. You’ll need to think about technical details such as how you get water and electrical to a new building. The design should be a combination of your needs, wants, and budget.” –Isabel Johnson