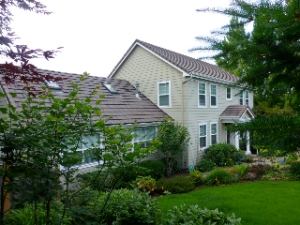 “It’s worked well. I don’t regret it. I think it’s good for our kids and grandkids to see their grandma and great-grandma.” –Bob Harris 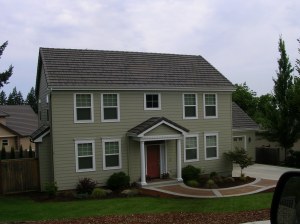 Bob and Jenny learned about ADUs (called Secondary Dwelling Units or SDUs in Eugene) when they were looking for a way to help Jenny’s mother Marilyn find a home. Bob worked with a realtor to research various options and learned that Eugene code would allow a secondary dwelling of up to 800 square feet. The house they owned could not accommodate a mother-in-law suite, so they purchased a property with the intention of adding a wing to the existing house, which would contain the SDU. 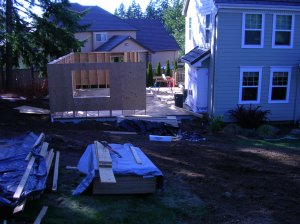 “It’s a wing on an existing home, so we wanted it to look like it was part of the house. From the street you can’t tell that it’s an SDU because the outside access is around on the end of the home, so it’s not visible. When we stand on the street, it’s pretty cool to look at it and know it’s a whole other unit. Her place is completely self-contained, except it doesn’t have a washer and dryer.” –Bob Harris

Since the ADU is attached to the primary dwelling, they designed it so it could be converted into a family room if it wasn’t being used as a separate unit. Bob’s favorite features of the ADU are the cathedral ceiling and skylights, which make the great room seem bigger than it really is. The skylights also allow for natural light and ventilation. He explains that initially they were going with a more traditional space and decided to go with the cathedral ceiling and the skylights almost an after-thought.

Since Jenny and Bob were designing the space for Marilyn, who is eighty-two-years-old and sensitive to temperature changes, they wanted to ensure that the space would be energy-efficient. So they had a ductless mini-split system installed.

“At the time ductless mini-splits were relatively new to the market place so the companies were still trying to figure out the appropriate place and installation. Our designer had never installed one before. There’s a cold spot when it gets really cold, so my mother-in-law uses an oil radiator heater on the coldest days.” –Bob Harris

Accessibility was also a critical design consideration. Their design uses an open floor plan and low thresholds for ease of mobility.

“There’s a bedroom and a small bath designed for an elderly lady. Although she doesn’t use a walker or wheelchair or anything, there’s a low threshold.” –Bob Harris 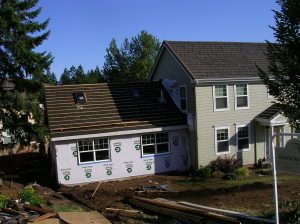 Jenny and Bob’s planned unit development has an architectural control committee that ensures that additions to existing structures will fit in. Their property is also located in a tree preservation area and they had to take out one Douglas Fir in order to construct the ADU. Several other trees had been removed to construct the original dwelling, so Bob and Jenny were required to replant 15 Douglas Firs on the lot.

“We had to re-landscape the whole property. We love the landscaping now, but it added expense we weren’t planning on. Besides the landscaping, the permitting went quite smoothly actually.” –Bob Harris

“They had to blow a hole in one end of the house and it was a disruptive mess for months on end. Once that was enclosed, and you could see it take shape, and the excitement on my mother-in-law’s face, it was very rewarding. The highlight of the build was the day Marilyn moved in.” –Bob Harris

These days Bob and Jenny live in the primary dwelling and Marilyn lives in the ADU. Bob says in the future they will probably leave the house as it is, using the ADU as a space for visiting guests.

“Having the second kitchen is nice when we have big meals.” –Bob Harris 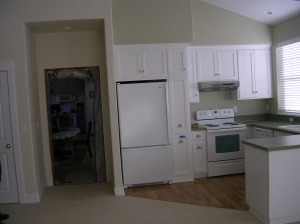 Bob notes that it was important to both Jenny and Marilyn that they not share a kitchen. (For another example of this strategy for inter-generational peacemaking, see Bonnie & Larry Dalton’s ADU: Two Kitchens, Please.) When I asked Bob what the interaction is like between the two units and whether they share any meals or chores, he joked, “Well, I’ve been trying to convince her to mow the yard and tone down the disruptive parties…”

Then he explained in more seriousness:

“It’s pretty much Marilyn and her cat. She has her own life and she goes out socializing. She drives and is able to do all her own shopping. Our house has a two-car garage and Marilyn has one of the spaces. She enters her dwelling through our space and, any time she’s there and we’re home, we chat. She almost never eats with us since her meals are timed very differently from ours. She’ll come in around dinnertime and sit and chat and talk about the day over a glass of wine. We share meals when the kids are down for family get-togethers. When the kids come with the great-grandkids she sits and visits until the noise level drives her home.” –Bob Harris

Bob and Jenny are storing the belongings that Marilyn has accumulated over the years. He notes that most of what they’re storing she hasn’t used in the past 6 years since she moved in. Marilyn has enough space inside her ADU for the items she uses day in and day out.

The only thing Bob dislikes about having an ADU is the responsibility of additional maintenance.

“There is an added expense. Now there are two garbage disposals and more toilets to repair. I’m a little concerned about it when we retire. Both my wife and I are within 5 years of retirement.” –Bob Harris

However, he feels that the flexibility they’ve developed by creating the ADU makes it worthwhile. 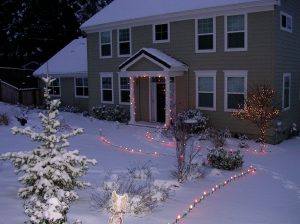 “Having our mother-in-law space provides our family a great deal of flexibility. We live in Eugene and we have Ducks season tickets, so the house becomes the Harris B ‘n’ B. People stay at the house during those Saturdays and the house provides space for these family gatherings.” –Bob Harris

So what is Bob’s advice for homeowners considering creating an ADU on their own property?

“The process we really appreciated was working with a contractor that we trusted. There was a fair amount of give and take and my mother-in-law was involved in the planning process. Pick a good design contractor that will listen to you. It will make it a whole lot easier.” –Bob Harris