Tom Hudson’s ADU: A Sneak Peek at an ADU Under Construction 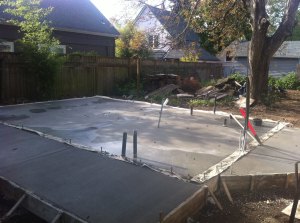 the slab for Tom Hudson’s ADU

Tom Hudson broke ground on his backyard cottage in March 2014. The concrete slab is finished, the underground plumbing has been stubbed out for connection, and the wall framing has begun. Tom anticipates that his wee home will be move-in-ready by the end of 2014. Meanwhile, his under-construction ADU will be included on the ADU Tour on June 1 so that people interested in creating an ADU on their own property can see one in progress.

Tom has worked in the building industry for 10 years and was considering how to create an ADU in his backyard when a bit of serendipity introduced him to his designer. Willie Dean of Ground Up Design Works had just completed the ADU Class for Homeowners taught by Kol Peterson. When Willie stepped outside and discovered his motorcycle battery had died, he called his friend Tom Hudson who happened to live next to Kol. They got to talking about ADUs. Two years later, Tom’s ADU has moved out of the design phase into construction.

There were several key factors influencing Tom’s decision to create an ADU in his own backyard. He owns his home in the Sabin neighborhood of Portland, Oregon and loves his neighborhood. He has enjoyed living with friends and housemates in the past but wants more private space now. So Tom likes that an ADU can create community while offering privacy and can provide housing flexibility as his needs change. He used savings to fund design and construction of his ADU.

“I’ve always enjoyed the community that I’ve had here in NE Portland and living in my existing house with my roommates. My ADU is an investment in the existing property and in local businesses. Investing in the community rather than allowing my money to be invested in the financial services sector was a valuable deciding factor in deciding to build an ADU.” – Tom Hudson

During the design process, Kol Peterson’s ADU: A Backyard Home was a big inspiration. Tom wanted a flexible, open floor plan that would allow him to use the space efficiently. He enjoys tinkering so he wanted a room that was surrounded by counters and workspace. His great room is utility use-driven space: half kitchen and half work area with a small sitting area.

Aesthetically, Tom likes craftsman details. The detailing of his existing home is simple, but Portland requires a detached ADU to match the main house. So Willie classed up the details on the ADU so that it has the look Tom prefers.

“The city makes you match the siding and the roofline, but the architectural style doesn’t have to match. My ADU is a small house with big windows, columns, and a porch. If the ADU was not required to match the main house I would have changed the slope of the roof, but it really wouldn’t have had much of an impact because I was trying to match the style of the neighborhood.” – Tom Hudson

“I suppose I might have advocated for something more contemporary if it were allowable. On the other hand, Tom likes the traditional look, so it may not look a lot different. It’s going to fit in well in the neighborhood, which was the idea.”

Energy-efficiency is also important to Tom, who is mechanical engineer. Tom worked for Green Building Services for 6 years so he’s familiar with energy analysis on high-performance buildings and systems. He and Wilie spent a lot of time on the enclosure details, exploring what systems would work best and figuring out a good plan for air sealing and insulating. The envelope is super-insulated for this climate, with R-21 walls, R-38 in the roof, and R30 under the slab. The energy-efficiency package also includes good windows, a heat recovery ventilator (HRV), a ductless mini-split heat pump, and an insulated slab. Of course, as Willie points out, the compact design is one of the most energy-efficient aspects of the project. A study conducted by the Department of Environmental Quality shows that building small is the single most effective green building strategy.

“The thermal envelope of the building was very important. That was a really in-depth study between Willie Dean, myself, and DMS Architects. We all studied the literature that was available and everyone’s experience. I did the calculation for indoor condensation. I wasn’t going to trust anyone to figure that out. In the end I was going to make sure it got done correctly.” – Tom Hudson

Tom and Willie significantly reworked the floor plan 4 or 5 times, moving all the big pieces around until they finally landed on a preferred design. In fact, they originally designed the ADU to be a really compact single floor, before deciding to add a half-story upstairs. Maintaining a smaller building footprint also allowed for more elegant site plan with room for a front lawn or garden. Tom says he didn’t feel limited by lot coverage requirements, but he wanted the front patio to align with the side door of the existing house which meant squeezing the ADU to the back of the property line.

“Tom is pushing himself to downsize significantly, so he kept pushing me to make the ADU smaller. I was of the mind that if we have 800 square feet to work with because that’s the maximum allowed by the city, let’s make it 800 square feet, but Tom said ‘I don’t need that much space.’” – Willie Dean

The footprint of the ADU is now 360 square feet, though the livable space will become approximately 640 once a code staircase is added later. Tom is content with the amount of space and, since he’s made the decision to downsize, he’ll live with just the things he likes most. As he moves across the backyard from his house to his ADU, things that don’t fit in the ADU will either go into the basement or into one of Portland’s ubiquitous free boxes. Despite the small footprint of the ADU, the site enabled Willie and Tom to create an ADU that feels bigger than it is.

“We got lucky because of the way the existing house is sited. It’s on a corner lot and even though the primary house fronts Skidmore and has a Skidmore address, the city always considers the short side of the lot – in this case the side of the lot that faces 10th – to be the “front” of the lot. This allows the front of the ADU to face the street completely and we got to build an awesome front porch that is visible from the street. It has a private entrance from the street frontage, so you don’t have to walk around another building to get to it.” – Willie Dean

Willie says that his favorite feature of the house is the front elevation, which he designed so that the ADU looks like a bigger house. The side gable isn’t symmetrical and it comes down further in the front than the back like a backwards saltbox. This design trick allowed the proportion of the front of the house to contextually match the rest of the houses in the area. It also provides for a huge covered front porch that looks out onto Skidmore. The porch is south-facing, so the porch overhangs provide shade, while the dormers above help bring winter sun into the ADU.

Willie explains that one of the challenges they faced in the design process was reworking the bay window bump-out. Originally the bump-out extended all the way to the ground and met a section of slab that was bumped out as well. Because the bump-out extends into the setback, the city would not allow it to actually meet the ground. On the other hand, if it didn’t meet the ground, the bump-out would not be considered a part of the footprint and could therefore exist within the setback. However, since Tom’s ADU is slab-on-grade construction, there aren’t any floor joists to cantilever out beyond the main wall to support the bump-out’s vertical load.

“So we worked with the structural engineer, Alex Grummel of Grummel Engineering, to make the bump-out structurally-sound using structural strapping and steel moment bracing since a true cantilevering wasn’t possible. The space it uses up is the same, it just doesn’t touch the ground. It was easier, quicker, and cheaper than getting a variance.” –Willie Dean

Willie noted that these sorts of regulation and design details are often the stumbling blocks for homeowners who are developing ADUs on their property. Many homeowners have a good imagination for the little space they’d like to create, but they aren’t familiar with the codes and regulations that they’ll encounter. So Willie shares this advice for homeowners considering creating an ADU on their property:

“If you’re thinking about creating an ADU, work with an architect. Just because it’s small doesn’t make it easy. It actually makes it a little harder because of all the code considerations. Coming up with clever spatial solutions is important and you want to do it well. That’s what architects are trained to do. I’m pleased with the process and thankful to Tom for the opportunity to pull it off. ” – Willie Dean

Once the ADU is complete, Tom plans to live in it for the foreseeable future and maintain new and current roommates in the existing house. However, he appreciates the option of renting out the ADU and living in the main house or renting out both units. (Portland is one of the few cities in the country that allows homeowners to rent both their primary dwellings and their ADU. See Martha Metzger’s ADU: Rent Now, Move In Someday for an example of this option.) Tom will still interact with his primary house since he will do laundry there, store things in the basement, and continue using his basement workshop. The garage and basement of the existing house will provide shared bike storage, bike shop, and wood shop for the house and the ADU.

So what advice does Tom have for homeowners considering creating an ADU on their property?

“I don’t have a ton of advice because of the stage of the project, but here’s a short list: Review your drawings and expect to spend a lot of time watching the construction process. Even if you have a dedicated general contractor, the GC will not be present during most of the construction process.  Subcontractors will show up and start working and that leaves you as the last line between design and construction. Don’t expect small details on the drawings to get picked up by the construction team. They typically like to build things as they’ve done before and this may or may not be similar to your drawings. You’ll have to check back with me later to see what my advice is when this is all done!” – Tom Hudson

Editor’s Note: Check back later this year for an update on Tom’s ADU and a photo gallery of the finished project.

2 comments on “Tom Hudson’s ADU: A Sneak Peek at an ADU Under Construction”