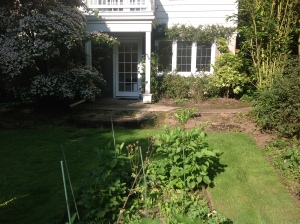 “The space has sort of grown up with me. Thirty-seven years ago it was fine for me to have young kids living there, who were maybe close to my age, and as I’ve gotten older the space has gotten a little more conservative also.” -John Baker 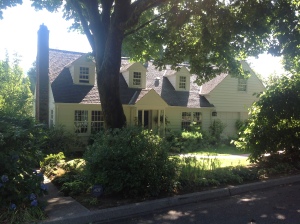 John Baker began renovating his 1941 Cape Code home when he first moved into it in 1977. Shortly after, a friend told him he’d like to live there and encouraged John to create an apartment in the basement. There was already a door that locked between the main floor and the basement – and there was precedent. The Lewis & Clark students who had lived in the house before John had rented the basement to a friend of theirs. John was just starting out and the idea of some additional income from renting the basement seemed like a good idea. So John transformed his daylight basement into a make-shift living space in 1978.

“The walls were covered in cheap paneling printed to look like wood.  The toilet and shower weren’t enclosed and the shower was scuzzy. So I made a bathroom and a kitchen. I put in crown molding to make it blend in with the rest of the house.” – John Baker

The plumbing and the fireplace dictated where the living room, dining area, and kitchen went. Over the next few years several friends rented John’s basement apartment.

“When I started I was a tad bit on the chintzy side. As I’ve moved ahead I’ve tried to pick something that will last and be pleasing to people who might rent.” – John Baker

By 1985 John had settled into his career and he was able to remodel his home. A contractor asked him if his basement was an ADU. Although John worked in real estate, he had never heard the term “Accessory Dwelling Unit.” He was familiar with the concept though. He knew that people had mother-in-law units, granny flats, and backyard cottages. He realized that if he turned his basement into a self-contained, legally-permitted apartment he could start charging market rate rent for it.

“Before then I was not aware it was a possibility. I thought it was illegal and didn’t know there was a possibility to apply and have it be a legal living space. The perception is that it’s complicated to do, but I didn’t find it difficult at all. I had an accessory dwelling before I even applied!” -John Baker 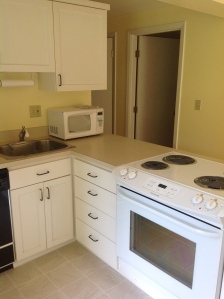 John used a home equity line of credit (HELOC) and credit cards to turn his basement apartment into a permitted ADU. His primary design consideration was that he wanted the apartment to be a fully self-contained residence. It’s a daylight basement and there were windows already, but John had big windows put in to make it feel less like a basement.John’s favorite feature of the ADU is that it’s comfortable. He wanted the ADU to be cozy, so he took advantage of the existing fireplace to create a comfortable living room.

The biggest challenge John has faced while creating his ADU is that remodeling the existing space has been expensive. He’s worked on the project as funds have allowed, updating various parts of the ADU over time. He has put in carpeting several times. Ten years ago added a walk-in-closet in the bedroom and a laundry room with its own washer and dryer. He also updated the heating system to a forced-air gas, zoned system, so the basement can be at different temperature from the house. One of the highlights for John was remodeling the bathroom two years ago. John explains that he has been intentional about incorporating green building features into all the later improvements he has made.

Like other ADU owners who have converted basements, John has had some trouble with water infiltration in the basement.

“If I had it to do all over again, I would have done more to prevent water seepage. I had the outside of the foundation waterproofed. That was a big project. They dug down to the bottom of the foundation and covered it with some sort of a chemical product. It seems to have worked. That was in the mid-1990s.” -John Baker

John has been living in his primary residence and renting out his ADU for nearly 40 years now, with just one short break. He says the level of interaction between him and his tenants depends on the tenant. 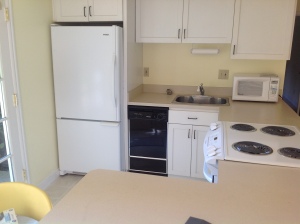 “My father lived there for several years. It was very handy because even though there’s a connecting door we had our privacy. When he was living there I was able to take care of him, which was a bit plus for me. The person who is there now is a friend. I’ve had several friends live there. It never has strained the relationship.”

John lived in the ADU himself about 8 years ago. He was remodeling the top floors of the house, so he lived in the ADU during the 7 month remodel. I asked John what he learned from living in his own ADU and here’s what he said: 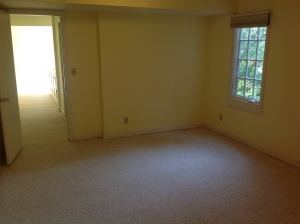 “It’s a nice space. I liked it. It’s comfortable. One of the things I learned is that most of us live in spaces that are way too big. We don’t need so much space. Upstairs I have a den and a living room, and I don’t need a living room, but I have both.” – John Baker

John has managed to get market rent during most of the time he’s rented out the basement, though he notes he charges less now than he did six years ago. And after renting the ADU for all this time, he only has one horror story.

“I’ve had one bad experience with tenants, which cost me a lot of money. They begged me to have a dog. They flooded the apartment. They took me to small claims court. All together it cost more than $10,000.” -John Baker

Overall, John’s pleased with his arrangement and he says he’d do it all over again.

“I don’t make a lot of money, so if it weren’t for the tax deductions, it wouldn’t be worth it. But it works well. I would do it again. I think it’s very beneficial for the city to be able to use infill like this to create more spaces for people to live.” -John Baker

So what advice does John have for homeowners considering creating an ADU on their property?

3 comments on “John Baker’s ADU: Renting the Basement for 37 Years”