Are Tiny Houses and ADUs the same thing? Not always, but they’re really good friends

Boy, you know it’s been a great day for the website when Carpet Carl tweet-checks it!

A few days ago, a post about ADUs by Michael Andersen on bikeportland.org got promoted on Treehugger and a few other places, which caused this site to experience several thousand more hits than usual.  Thanks Michael!

That’s when the tireless rug salesman, a staple in Portland TV commercials, jumped in, linking to our gallery of ADU projects.

We have some new 'tiny' area rugs for these new tiny houses. 🙂 http://t.co/3pAn0iLIm6

As happy as I was about the online attention, I started wondering about the equivalence implied by Mr. Carl interpreting Mr. Andersen: that tiny houses and ADUs are the same thing.  (After all, have they ever been seen in the same room together?)

“In some central Portland neighborhoods, one in 10 new homes is now tiny” was the bikeportland.org headline.   The story was about how ADUs, restrained by regulations to 800 square feet, are a really popular development option in Portland, in some parts of town 10-15% of newly created dwellings.

That’s good news for the environment — after all, 800 sf, as a maximum, is a lot smaller than 1500, which is the median square footage of newly constructed single family homes in Portland, according to the Census’ 2011 Housing Survey.   And a very good case can be made that the single greenest thing one can do when building new housing is to make it small.

But are ADUs tiny houses?  In a way, it’d be a great thing for ADU advocates if people started using them as synonyms, because people have a kind of romantic obsession with those cute gabled places smaller than some chicken coops.  They are symbols, in the best way, of self-sufficiency, craft, simpler living, and a kind of virtuous modesty.  They’ve inspired legions of Pinterest boards, flickr pools, tumblrs, etc. 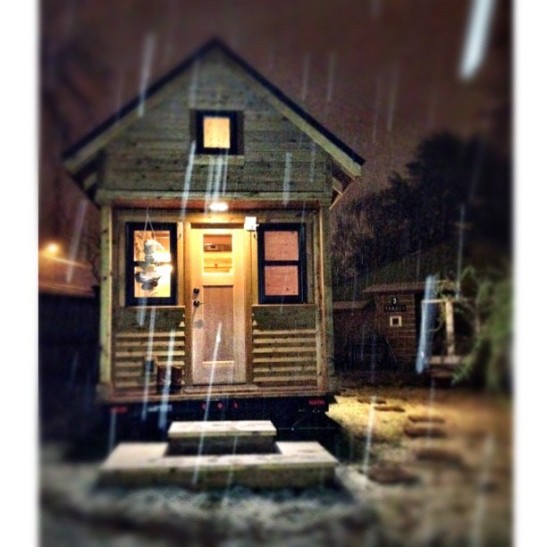 But ADUs aren’t always gabled houses, or houses at all.  An ADU can take the form of a tiny house, as in a backyard cottage.  But ADUs can take all sorts of other physical forms… basement apartments, attic apartments, “carve-outs” of the main house, apartments over the garage, etc.  Sadly, those forms don’t inspire the same kind of romance and devotion.  I could not find even one tumblr about “gorgeous basement apartments.”

ADUs are permanent installations — legally part of a larger property that includes a standard single family house.  The tiny houses romanticized on the web often have wheels, which makes them more like boats or RVs than real estate.  And those houses on wheels are usually super-small, like 200 sf or less.

ADUs are usually bigger than that.  Though the dividing line is completely arbitrary, many people would call ADUs “small” rather than tiny. That doesn’t mean they are somehow less virtuous.  It all depends on how the housing is being used.  A 200-square foot tiny house used as a permanent residence is likely to be light on the environment, but my personal anecdotal experience is that this scenario is not that common.  Used as a retreat, a vacation house, or some other supplement to a regular dwelling, it’s, well, more of a cool possession than a lifestyle.  In contrast the great majority of ADUs are used as full-time residences, so their potential is more likely to be realized.

So, ADUs and tiny houses aren’t often the same thing.  But they have a lot in common, and that’s why people confuse them.   ADUs and tiny houses are like those high school girls you can’t tell apart: they wear the same kind of clothes; they listen to the same kind of bands; and both of them make a  blatant rejection of the McMansion/Nuclear Family presumption that rules so much of American housing.

In my opinion, tiny houses and ADUs both promote Living at a modest, more-sustainable scale with a decent quality of life.  Not in poverty, but not in indulgence.

They both promote a good mix of independence and connection.  When your mother-in-law lives in your garage ADU,  or a friend lives in a tumbleweed house on wheels in your backyard, it seems like the most natural thing in the world.  They get privacy and the dignity that comes with it — a room of one’s own!  But they get chance at connection too.  Small dwellings are good for making personal retreats, but their limited space also encourages their inhabitants to go out and experience the world.

Finally both ADUs and tiny houses promote an idealistic kind of financial sustainability.  Though there are no statistics on this yet, anecdotes clearly relate that, in the right hands, both ADUs and tiny houses can be tools for helping stabilize finances, allowing people to make the lifestyle choices they want and be less trapped by debt.  People that have paid off their little dwellings just sound different when you talk to them — a little freer, a little more empowered, a little more able to do good in the world.

In my experience, that’s what all this tiny-house-dreaming is really about.  These are motives and feelings that all the rugs in the world can’t satisfy. Carpet Carl, I’m not sure you really get it. 🙂

You still get props for standing on that billboard.

7 comments on “Are Tiny Houses and ADUs the same thing? Not always, but they’re really good friends”

This entry was posted on March 1, 2014 by Martin John Brown in News.