“Michael built this little home for our retirement years and it looks like it will be one of the smartest investment decisions we’ve made.” – Ellen Bassett

Michael Klepinger first learned about ADUs while walking through his neighborhood on a fall afternoon. Michael had a background in sustainable design and building, but until he stopped to ask his neighbors about the little house they were building, he was unaware that Portland had a favorable policy about ADUs and an ADU Program Guide for homeowners interested in developing one on their property.

Michael and his wife Ellen Bassett purchased their southeast Portland home intending to retire and age in place in a central-city neighborhood. They have neighbors who have owned their homes for two, three, four, and even five decades. They’ve been sharing a driveway, a rain garden, cups of sugar and occasional supper parties with their next door neighbors for several years.

“We had just finished completely renovating our main home and had no intentions of moving – but then a great job opportunity came along.” – Michael Klepinger

So when Ellen’s new university professorship required relocation to Virginia, they had to make big decisions about their property. They knew they wanted to ultimately return to their home in Portland and for the time-being they planned to return during academic breaks. It didn’t make sense to leave their beloved home vacant while they were gone. However, if they leased their property they would have no place to call home when they returned to Portland for the holidays. A little ADU solved the problem.

Michael and Ellen decided to build an ADU in their own backyard so that they would have a home base in Portland. Ellen and Michael figure that when they move back into the main house some years from now the ADU could be an income-generating rental or perhaps a caretaker’s cottage. In the meantime, their primary dwelling is a profitable rental and the ADU is a cozy place to come home to when their schedules allow. 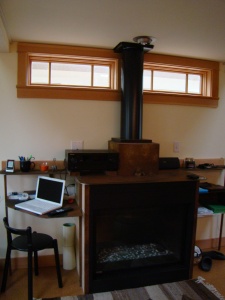 Their primary design considerations were fitting the ADU within the setbacks of their 85’ by 90’ lot and providing privacy for the three neighboring houses. As the couple worked to develop a design that would work well for them, they kept aging-in-place in mind. They located all the requisite living spaces on the first floor. The open-floor plan they created is composed of three 8 foot by 18 foot bays containing the kitchen and dining nook, the living room and fireplace, and the bathroom and entryway. A sofa pulls open into a bed. A storage loft above the living room and bathroom is accessible by a ladder.

Financing proved to be a big challenge in 2011-2012. They were unable to secure a construction loan, so they withdrew from a mutual fund and supplemented it with a Home Equity Line of Credit (HELOC). Michael advises others to take advantage of Portland’s System Development Charge waiver, saying that it saved them nearly $14,000. Michael started construction of the ADU in June of 2012 and finished six months later in December.

“When we put in the foundation, I thought ‘It seems so small…’ but once the walls went up it felt just right. In terms of living space, it is remarkable how comfortable we have found this little place.” -Ellen Bassett

Michael previously worked in the solar greenhouse industry so he knew how important it would be to build this little house in the sun. The best place on their property for solar gain was the northeast corner, so that the ADU could receive sunlight from the south and east. However, that particular corner is occupied by a lovely garden and a magnificent English walnut tree that neither of them could fathom disturbing. Instead they located the ADU on the northwest corner of the lot, as close to the setbacks as possible, which allows full sunlight between the main house and ADU. Most of the space between the primary dwelling and the ADU is taken up by a giant hot tub.

“One hot tub distance from the main house turns out to be just about the right distance for maximum solar gain in the ADU.” – Michael Klepinger

Since they love their main house, which legend says was designed by Oregon’s first registered female architect in 1903, they were happy to replicate its look for the ADU, including the low-slung hip roof. Sustainability also guided many of their decisions. To support the storage loft, Michael installed LVL beams, which are manufactured from waste materials. The windows are all double-paned and argon-filled and the flooring is cork throughout the great room. They used reclaimed tile in the shower and linseed based-flooring in the bathroom. Michael installed four skylights – one in each slope of the hip roof – for daylighting and passive ventilation. The wall system is insulated to R-25, which is beyond the city code requirement. The appliances are Energy Star and the on-demand gas water heater is more energy-efficient than a tank heater. 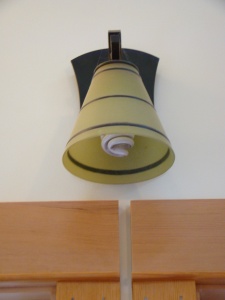 As he built the ADU, Michael used salvaged materials whenever practical to save money and add character. The gas fireplace – which is the single heat source – is flanked by shelving and a hearth built out of recycled steel. The brass and glass art deco light fixtures over the dining area and kitchen island were $5 each at the ReBuilding Center. The top of the dining room table was repurposed from an old desk. The railing separating the loft from the kitchen is fashioned from 3’ by 4’ remnant steel panels left over when machine parts were punched out of large ¼” thick sheets of steel. (For another example of reusing old machined steel in this way, check out Kol Peterson’s ADU: A Backyard Home.) The corner of the property where the ADU is located was formerly a flagstone patio. Michael numbered every flagstone and moved the whole patio 30 feet east. The ADU and the main house now share a common fire-circle on the patio.

“Some designers or builders would have scrapped the flagstones and started over, but that seemed wasteful, so I pieced it back together again. It’s not exactly the same, but it was worth the effort.” – Michael Klepinger 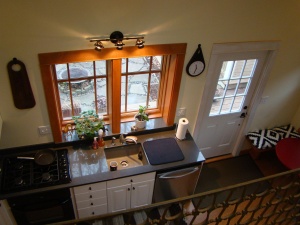 Ellen says her biggest surprise is that “the ADU is actually very private.” The ADU ended up serving a privacy function, both for Michael and Ellen and for their neighbors, because before the ADU was built their neighbors to the north had a direct view into their primary dwelling and visa-versa. The ADU’s windows were strategically located to give both houses more privacy. Ellen and Michael say that their main frustration is that sound travels in the summertime, when windows are open, but they don’t mind too much and note that this is one of the challenges of urban living.

Michael’s advice for homeowners considering building an ADU on their property?

“If you’re building in close proximity to your neighbors, develop good relationships with them. Keep them updated during design and give them a chance to speak up. Our neighbors trusted us because they’d seen the work we did on the main house. We involved them in the process and they volunteered during our wall raising!” -Michael Klepinger

the ADU matches the main house

the ADU is one hot-tub-width from the main house

the flagstone patio was moved 30′ east

the gas fireplace is flanked by shelves made of recycled steel

the kitchen island is the hub of the great room

the dining table was made from an old desk

a small but comfortable bathroom

a stacking washer and dryer

recycled tiles in the bathroom reflect tree branches from the window

tucking in under the roof

there’s plenty of storage space in the loft

an entertainment center tucks under the roof