Skinny homes on 25’ wide lots.  New apartment buildings without off-street parking.  Bulky 2,500+ sq. ft. ‘traditional craftsman’ homes popping up all over the inner-east side.  These are Portland’s most visible and contentious examples of in-fill housing development from the past 5 years.  Rightly or wrongly, each has drawn vocal ire from neighbors and neighborhood groups. 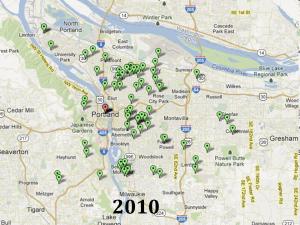 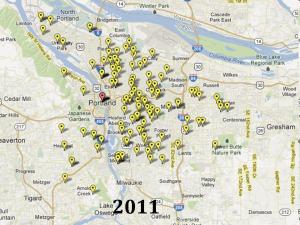 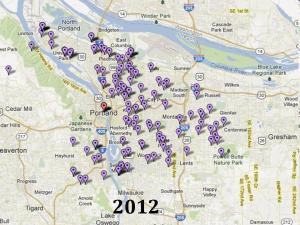 Also over the past 5 years, there has been quiet growth in the numbers of ADUs permitted.  But ADUs are hard to see from the street, so it’s an easy trend to miss.

The Projects and Stories section of this website and annual bike tours offer glimpses of completed ADUs and provide inspiration to would-be ADU builders.  But they might also create the impression that ADUs are rare, novelty homes.  That’s no longer the case, as documented by the series of maps to the left that Kol Peterson generated using ADU permit data from the City of Portland.  Each map shows the ADUs permitted in a particular year, from 2008 through 2012.  Every colored dot represents a newly permitted little home, likely one that neighbors 200’ or more away don’t even know exists.  The big jump in ADU activity in 2010 corresponds to Portland’s decision early that year to waive System Development Charges (SDCs) on ADUs and increase the maximum ADU size from 33% to 75% of the primary house (up to 800sf).

What strikes me – in an encouraging way – is that growth in the number of ADUs seems to be finding acceptance as a relatively palatable form of in-fill density at a time when other forms of in-fill are not.  Why?  One reason is that zoning regulations on the height, size, and placement on the lot force detached ADUs to be discreet from the street, while entry door requirements on ‘carve-out’ (ie. internal) ADUs render them practically invisible.  In addition, I suspect that most people can relate to a time or place in life when an ADU would be the ideal form of housing for them or a loved one, whereas for many folks it feels inconceivable to live in a parking-free apartment building, skinny house, or bulky new home (even though, clearly, plenty of Portlanders appreciate each of these housing forms).

My hope is that Portland will go a little further in easing restrictions on ADUs and encourage (ie. make legal) other forms of in-fill development that would be similarly discreet.  For specific ideas on this, check out Alan Durning’s Legalizing Inexpensive Housing series on the Sightline Institute blog.  Or just cruise through Ladd’s Addition and count mailboxes on some grand old homes (It was legal in Portland after WWII to internally divide large homes into multiple smaller units, but you can’t do that anymore).

In a city where there’s been vocal push-back against several forms of in-fill development, it seems that ADUs offer a rare, politically viable way to house more people within traditional residential neighborhoods while retaining the single family character that makes these neighborhoods so compelling.  I’m not sure Portland will ever liberalize ADU rules to the extent of Whistler, BC, where 75% of new homes are now built with ADUs (read more).  But I hope we take a few more steps in that direction so that the growth trend illustrated above continues.

This entry was posted on May 4, 2013 by Eli Spevak in News, Policy & Trends and tagged community, permitted, portland.